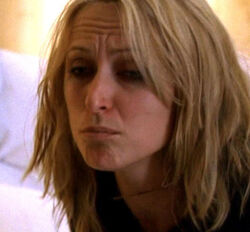 Lily was a heroin addict who spent the night with Charlie in Sydney, Australia, before he boarded Oceanic Flight 815. She pretended to be a big fan of Drive Shaft just so she could get her fix. Before she left, the two of them fought over the last of the heroin, which Charlie had been holding out on. After a brief struggle between the two for the heroin, Lily gave up and stormed out of Charlie's hotel room, saying, "You're pathetic." These words were later echoed by Charlie to Danielle Rousseau when Charlie and Sayid came upon her on the beach holding Aaron. ("Exodus, Part 2")

Retrieved from "https://lostpedia.fandom.com/wiki/Lily?oldid=1095250"
Community content is available under CC BY-NC-ND unless otherwise noted.