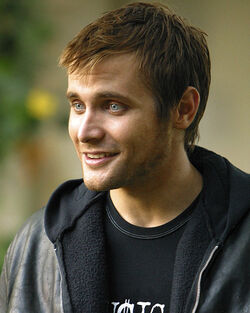 Liam Pace was the lead singer of Drive Shaft, and Charlie's older brother.

During a childhood Christmas, Liam had received lots of presents (including a Voltron toy) whilst his younger brother Charlie seemingly had none. His brother was in fact given a piano that Christmas. ("Fire + Water")

Some years later, Liam and Charlie were on vacation at a Butlins holiday camp. It was on this vacation that their father attempted to teach Charlie how to swim, and Liam used this opportunity to taunt his brother to discourage him from jumping in. ("Greatest Hits")

As a member of Drive Shaft

Charlie and Liam formed a band called Drive Shaft. Early in their musical career, the group were driving to a gig, when suddenly one of their van's tires blew. Charlie explained that he had had enough of band-life and was ready to quit, much to Liam's dismay. Suddenly they heard "You All Everybody" on the radio for the first time, and celebrated. Charlie decided to stay with the band. ("Greatest Hits")

Liam became a drug addict while touring with Drive Shaft.

One Christmas, Liam gave Charlie his great-grandfather's DS ring, a Pace family heirloom that their mother had given to Liam. Charlie refused, but Liam explained that out of the two of them Charlie was the one who would have a family and live past 30. Charlie then said he would hold the ring for his brother but that he would not take it from him. ("Greatest Hits")

Some time later, at a gig, Liam stole Charlie's lines. Charlie became angry with Liam when he saw him retire to the dressing room just after their show, with a girl in one arm and a wrap of heroin in the other. At another show, Charlie entered Liam's dressing room, ordering Liam's girls to get out. The main singer had missed the sound-check, and seeing his brother in the state that he was in, Charlie asked Liam to make good on his promise to walk away. Liam refused, saying that without the band, Charlie was nothing, and he stormed out of the room. Just afterward, Charlie saw Liam's heroin stash and took some of it, leading to his own addiction. ("The Moth")

Because of Liam's destructive habits, the band began to lose its magic, reduced to recording advertising jingles based on "You All Everybody", their one hit song. For example, "You All Every Butties" was recorded as a commercial for Butties Diapers. However, Liam's drug problems made even this impossible, as he was too wasted to be able to follow simple directions.

Liam married a woman named Karen with whom he had a daughter Megan, named after his mother. He missed Megan's birth while out getting a fix, an event that seems to have been key to him realizing that he needed to get his life back together. In order to get as far away from temptation as possible, Liam quit the band and sold Charlie's piano (a gift of priceless emotional significance to Charlie) for plane ticket money to allow him to emigrate to Sydney. Karen's uncle had promised him a job in Sydney, and he successfully underwent rehab while there. ("Fire + Water")

Liam refused Charlie's offer to reform the band for a comeback tour, but offered to help Charlie overcome his addiction to heroin. ("The Moth")

In the flash sideways timeline, Liam went to the precinct of the Los Angeles Police Department where James Ford and Miles Straume worked to bail out Charlie who was arrested on Flight 815 on drug charges. ("Recon")

He performed with Drive Shaft at a benefit concert hosted by Eloise Widmore for the Golden State Museum of Natural History. Daniel Widmore, Eloise's son, accompanied the band on piano. Liam looked concerned about Charlie's behavior as the performance began, and he, with the rest of the band were left to continue the show when Charlie left the stage after seeing Claire. ("The End")

Retrieved from "https://lostpedia.fandom.com/wiki/Liam_Pace?oldid=1109059"
Community content is available under CC BY-NC-ND unless otherwise noted.