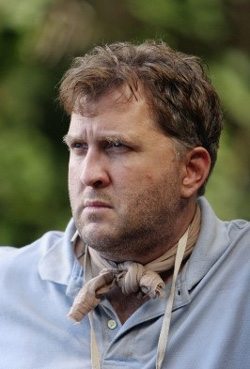 Dr. Leslie Arzt was a middle section survivor of Oceanic Flight 815. He was a high school science teacher who managed to discover many new species of insects and arachnids, including the Medusa spider, but was killed on the Island while handling dynamite near the Black Rock on Day 44.

Leslie Arzt was a ninth-grade science teacher who married three times. ("Exodus, Part 2"). Sometime before the crash, he had met a woman on the Internet using a picture of his friend Nick. They arranged to meet in Sydney, but the woman disappeared after he had ordered lobster in a restaurant. Arzt decided not to go out into the Sydney nightlife, but to book an early flight home instead. This turned out to be Oceanic Flight 815. ("Tropical Depression")

He was in line talking to another man when Hurley was rushing to make it onto Flight 815, and he also helped a very pregnant Claire store her luggage in the overhead compartment of the plane. ("Exodus, Part 3")

Arzt woke up amid the wreckage on the beach. Nikki, thinking he was someone else, helped him up and Arzt asked her if they were still alive. ("Exposé")

A few days later, Arzt ran past a group of survivors yelling that Boone had taken the water. Then everyone was distracted by Jack, who gave his "live together, die alone" speech. ("Exposé")

When Jack wanted all the survivors to move to the caves, Arzt expressed his doubts that it was a good idea. He told some of the other survivors, including Hurley and Michael, that he doubted Jack's ability to lead them. Just then everyone heard the monster, and Arzt changed his mind, deciding he would be safer in the caves than he would on the beach. ("Arzt & Crafts")

Arzt had a small structure built for himself where he kept a large collection of island insects which he said were previously undiscovered species. When approached by Nikki, Arzt told her about a dangerous spider and, at her request, helped her figure out where her luggage might have been thrown from the plane. He ineffectually flirted with Nikki and comically tried to impress her. ("Exposé")

A few days later, Arzt and Shannon argued with Kate because the guns from the Marshal's case were kept secret. ("Exposé")

Arzt warned Michael that he shouldn't wait to set sail on the raft because of the trade winds shifting south. He used a windsock to demonstrate them, claiming he knew all of this because of his profession. Sawyer questioned why they should listen to a science teacher and Arzt replied, "Because I'm a doctor, and you're a hillbilly." ("Born to Run")

However, Arzt later revealed to Michael he had made the whole monsoon season story up just to get Michael to launch the raft as soon as possible. He apologized for lying and expressed his faith in them being able to bring back help, saying that he'd be the first to greet them when they came back. ("Tropical Depression")

When Locke suggested hiding survivors inside the hatch, Jack and a group of survivors set out on a mission to the Black Rock to retrieve dynamite to blow open the hatch door. Arzt volunteered to go along with them, saying he knew "how to handle volatile dynamite better than anyone else." ("Exodus, Part 1")

Danielle Rousseau led the group into the woods and abandoned them once they had reached the old slave ship. Jack, Kate and Locke found a crate of old and very unstable dynamite inside the vessel and brought it to Arzt, who, ironically, triggered one of the sticks and blew himself up while lecturing the others on how to handle it. Pieces of his body scattered throughout the area. The rest of the group took this as a warning as they continued to wrap the dynamite in wet cloth.

When Jack and Locke pulled out the dynamite from the box, a shaken Hurley pointed to something on Jack's back, saying, "You have some... Arnzt... on you." ("Exodus, Part 2")

After Arzt's death, Nikki took his insects and kept them at her own campsite. She later used the Medusa spider Arzt told her about to paralyze Paulo. ("Exposé") A few hours after Arzt died, Jack informed the rest of the survivors when Charlie asked about his whereabouts. ("Man of Science, Man of Faith") His death was later mentioned by Charlie to Eko, ("Live Together, Die Alone, Part 1") and by Hurley to Richard. ("Dr. Linus")

In the flash sideways, Arzt recognized fellow passenger Hugo Reyes from his commercials for Mr. Cluck's Chicken. He asked Hugo to do one of the voices from his commercials, and laughed hysterically when Hugo finally gave in. He excitedly told James Ford that Hugo was the owner of Mr. Cluck's, but James was indifferent. Arzt then asked Hugo how a guy like him was able to buy a major corporation, and Hugo explained that he won the lottery and liked chicken, so he bought it. Arzt looked disappointed and slightly irritated with this answer before walking away. ("LA X, Part 1")

In the airport, Arzt saw Sayid Jarrah at the baggage claim and stared at him for a moment. ("LA X, Part 2") Later, Arzt walked in front of Kate and Claire's cab and yelled at the driver when the cab almost hit him. Kate ordered the driver to keep going, and the cab ran over Arzt's suitcase, which made Arzt even more angry. ("What Kate Does")

At work, Arzt sat with fellow teacher Dr. Linus in the teacher's lounge and they complained to each other about the school's lack of resources and about the inadequacy of the principal, Don Reynolds. Substitute teacher John Locke suggested that Ben become the principal. Later, Ben asked Arzt to hack into the school nurse's email account. Ben believed she might be engaging in inappropriate sexual activities with Reynolds on the school grounds, and he wanted to have some evidence to use in blackmailing Reynolds out of his job. Arzt agreed to help Ben in exchange for some new lab equipment and a good parking space. Arzt was disappointed when Ben decided not to blackmail Reynolds, so Ben gave away his own parking spot to Arzt. ("Dr. Linus")

On the back of the box for the Highly Flammable Toys Arzt custom-made action figure, there is a brief biography. According to Daniel Roebuck, this information was written by Javier Grillo-Marxuach, and can therefore be reasonably considered to be canon.

Retrieved from "https://lostpedia.fandom.com/wiki/Leslie_Arzt?oldid=1107880"
Community content is available under CC BY-NC-ND unless otherwise noted.