This article is about the Temple Other. For the character in Desmond's flashes, see Jimmy Lennon. 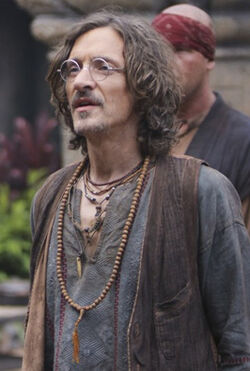 Lennon was one of the Others who took refuge in the Temple. He acted as translator for Dogen and was killed by Sayid at the spring just before the Man in Black invaded The Temple. ("Sundown")

When Jack, Kate, Hurley, Jin, and Sayid arrived at the Temple, Dogen ordered the Others, through Lennon, to shoot them. Hurley, however, announced that Jacob had sent them and wanted Sayid to be healed. Lennon then asked for proof that the group was sent by Jacob. Hurley produced a guitar case containing a wooden ankh. Inside the ankh was a paper, presumably listing the survivors' names, among other unspecified information regarding Sayid.

Lennon later on was present when Sayid was taken into the spring to be healed, and, following Sayid's death, told everybody that he wasn't able to be saved. He led Hurley to Dogen's chamber deep within the Temple, where he learned that Jacob was dead. Lennon assisted The Others in preparing the Temple's defenses, and told Hurley the goal was to "keep 'him' out".

Lennon was then sent, along with several armed Others, to retrieve Jack so that Dogen could speak with him. As Lennon tried to convince Jack to come with him, Sayid suddenly sat up, alive, much to Lennon's surprise. ("LA X, Part 2")

After conferring with Dogen about this turn of events, Lennon summoned Sayid to Dogen's room, where Sayid was promptly tortured. Lennon informed Sayid that it had simply been a "test," and that he had "passed." After Sayid left, Lennon observed that he had just lied to him. ("What Kate Does")

Retrieved from "https://lostpedia.fandom.com/wiki/Lennon?oldid=1106018"
Community content is available under CC BY-NC-ND unless otherwise noted.