Hanso Foundation Board of Director

Lawrence Peck is a member of the Board of Directors on the Hanso Foundation, in the storyline of the alternate reality game The Lost Experience.

He was sentenced to eight years in a federal penitentiary for insider trading in 1989. He subsidized it through the retirement fund of a health-care union. An additional two years of incarceration were added for perjury and the obstruction of justice. However, Peck served only eighteen months of his sentence in a federal minimum security facility for good behavior.

On May 24th, the password inmate asylum opened a hidden flash on thehansofoundation.org website. Persephone messages accompanied the images.

The opening sequence of documents 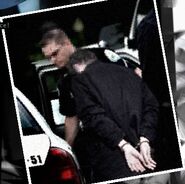