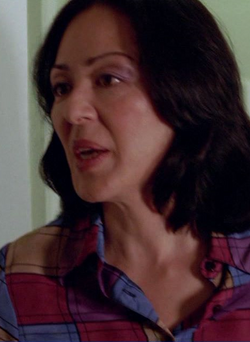 Lara Chang is Pierre Chang's wife and the mother of Miles Straume. She was a member of the DHARMA Initiative and lived on the Island in the 1970s. In 1977 Lara and her son were evacuated from the Island on the submarine Galaga. Off-Island, Lara came to reside in Encino, California.

Lara lived with her husband Pierre on the Island. One day Lara stood behind a time-traveling adult Miles, in the cafeteria lunch line. This was when adult Miles realized he was now living among his parents. ("Some Like It Hoth")

Lara and Pierre had a son whom they named Miles. It was implied by Pierre that Miles was named after the jazz musician Miles Davis, of whom Lara was a fan. Lara was seen in 1977 in the company of both her husband and baby son, unaware that an adult version of Miles was watching from outside. ("Some Like It Hoth")

The next morning, at 8:15 a.m., Lara awoke to the sounds of the alarm going off and of baby Miles crying. She told Pierre that it was his turn to help their son. ("Because You Left")

The next day Pierre organized the evacuation of all the DHARMA women and children from the Island. Lara and her baby son left the Island on the submarine, on her husband's orders. Lara appeared upset by her husband's insistence that they should leave. After leaving the Island, Lara and Miles moved to the United States. ("Follow the Leader")

Lara and Miles eventually settled in Encino, California. Because Pierre didn't tell her the reasons for the evacuation from the Island, Lara eventually felt that Pierre had abandoned them.

Approximately eight years later, while Lara was finishing up the paperwork for her new apartment landlord, Miles unwittingly discovered a dead body in apartment 4. Lara inquired as to how he knew the body was there, and Miles said that he heard the dead man screaming.

Many years later, Lara became gravely ill. She was being cared for in the same Encino apartment by a nurse named Evelyn when a rebellious teenaged Miles came to visit her after not having seen her for quite some time. He tried to get her to tell him what she knew about his abilities and about his father. Lara simply told Miles that his father was long dead, that he had never cared about them, and that he was buried somewhere Miles could never go. ("Some Like It Hoth")

While Daniel Faraday was filming a video of Pierre that was broadcast into the future, Lara was nearby with baby Miles. Several seconds into filming, Miles began crying uncontrollably, interrupting Chang's video. This caused him to stand and yell to an off-screen Lara to take him outside, as he only had one chance to film the video (presumably because of a "pinhole" he had mentioned earlier). The sound of Miles crying ended and Chang continued filming.

Retrieved from "https://lostpedia.fandom.com/wiki/Lara_Chang?oldid=1109190"
Community content is available under CC BY-NC-ND unless otherwise noted.