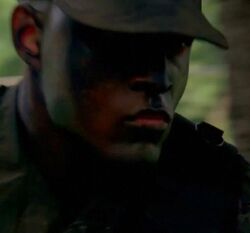 Lacour was a member of the mercenary team sent to the Island aboard the freighter Kahana by Charles Widmore to retrieve Benjamin Linus and "torch the island".

When the freighter neared the Island, Lacour, with the rest of the team, travelled to it on a helicopter piloted by Frank. The team ambushed and successfully killed Karl and Rousseau and kidnapped Alex. ("Meet Kevin Johnson")

Upon the return of the helicopter to the freighter, Lacour helped unload the injured Mayhew. He was also present when Keamy and Captain Gault had a showdown on the frieghter and witnessed the death of the captain. ("Cabin Fever")

Back on the Island, Lacour patrolled the Orchid station along with Keamy and the other mercenaries, holding a gun to Ben as he surrendered himself. ("There's No Place Like Home, Part 1")

Along with the other mercenaries, Lacour escorted Ben back to the helicopter. When the mercenaries arrived to the helicopter, Keamy ordered Lacour into the jungle to be on the lookout for Others, but Lacour was snared by the legs by an Other and tripped. Lacour fell backwards, his automatic rifle firing into the air. ("There's No Place Like Home, Part 2")

Retrieved from "https://lostpedia.fandom.com/wiki/Lacour?oldid=1106313"
Community content is available under CC BY-NC-ND unless otherwise noted.