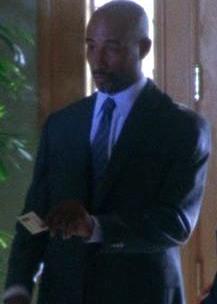 Kyker working under the LAPD was assigned to the case of Hurley who was suspected of a triple homicide. Kyker and his partner were called to Hurley's house when Hurley was hiding there, they spoke with Hurley's father who told them that he did not know of Hurley's whereabouts.

However the detectives began to wait outside Hurley's house, until Hurley ran outside shouting that he was a murderer and allowed himself to be arrested at night. The detectives took him into custody. ("The Lie")

Retrieved from "https://lostpedia.fandom.com/wiki/Kyker_(The_Lie)?oldid=1115898"
Community content is available under CC BY-NC-ND unless otherwise noted.