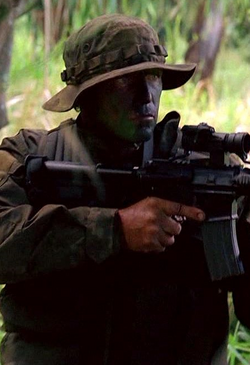 Kocol was a member of the Kahana's mercenary team sent by Charles Widmore to the Island to capture Benjamin Linus and kill all of the Island's other inhabitants.

Upon reaching the Island, Kocol, with the rest of the team, left on a helicopter piloted by Frank Lapidus to reach the Island. Upon their arrival, the team killed Karl and Rousseau and kidnapped Alex. ("Meet Kevin Johnson")

Kocol traveled with the mercenaries to the sonar fence, which was deactivated by Alex. They then invaded the Barracks, killing Doug, a blonde woman, and Jerome. Kocol fired a rocket at Claire's house, blowing it up and nearly killing her. Kocol brought Alex to Keamy at his whistle, and then he and the other mercenaries looked on as Keamy and Ben negotiated over her, which ended in Alex's death. Later that night, Ben summoned the Monster to attack the mercenaries in the jungle near the Barracks. Kocol and the other mercenaries fell back from the Barracks as the Monster attacked them. ("The Shape of Things to Come") He later helped to carry injured Mayhew back to the helicopter. ("Something Nice Back Home")

Upon the return of the helicopter to the freighter, Kocol helped to unload the injured Mayhew. He was also present when Keamy and Captain Gault had a showdown on the freighter, and he witnessed the death of the captain. ("Cabin Fever")

He later patrolled the Orchid station along with Keamy and the other mercenaries, and held a gun to Ben as he surrendered himself to Keamy. ("There's No Place Like Home, Part 1")

Kocol helped the team escort Ben back to the helicopter. When the mercenaries arrived at the helicopter, the group was ambushed by the Others, with the help of Kate and Sayid . Kocol was jumped on by an Other, who pulled Kocol's head backward until his neck snapped, killing him instantly, making him the first casualty of the mercenary team in the battle. ("There's No Place Like Home, Part 2")

Retrieved from "https://lostpedia.fandom.com/wiki/Kokol?oldid=1106308"
Community content is available under CC BY-NC-ND unless otherwise noted.