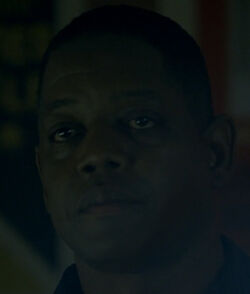 Kiley, or known as "Kilo" was a loan-shark from whom Sawyer borrowed money. He was apparently an extremely well-connected criminal, who was in the possession of great deals of money. He appeared to be a leader in a criminal organization. ("Confidence Man")

Sawyer utilized Kilo's resources in his con of Jessica. Sawyer used Kilo's money to convince Jessica's husband to give him an equal amount, as part of an elaborate long con. Kilo met Sawyer in a dark pool hall, where they discussed the progress of the con. Kilo then cornered Sawyer, and menacingly told him that he expected to get his entire investment back, plus a percentage of Sawyer's take.

When Sawyer had a change of heart about the con, he left Kilo's briefcase at Jessica's house, thus, Kilo did not get any of his money back. It is not known if Sawyer faced any retribution because of this.

Retrieved from "https://lostpedia.fandom.com/wiki/Kilo?oldid=1118091"
Community content is available under CC BY-NC-ND unless otherwise noted.