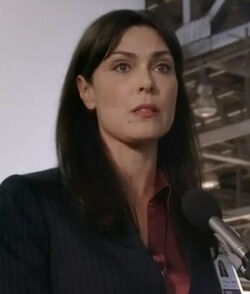 On the trip to the military facility just west of Honolulu, Karen sat in the cockpit along with the pilot and co-pilot. Upon nearing the landing, she walked back to see six Oceanic Flight 815 escapees of the Island in the cargo hold, telling them that their families were waiting, and that they didn't have to answer any press questions. Jack, however, responded that they would answer questions. After making sure everyone agreed with this decision, Karen revealed to them that the press had branded them as the "Oceanic Six", which she opined was not necessarily the best name, but that it was "catchy."

At the following press conference, Karen revealed to the public the story of the Oceanic Six (which was fabricated by an unknown source), of how they crashed, how Kate gave birth, and their eventual salvation. She then denied a reporter's question about Kate's fugitive status.

After the press conference, Karen pointed Sayid towards Nadia, who was waiting for him. ("There's No Place Like Home, Part 1")

Retrieved from "https://lostpedia.fandom.com/wiki/Karen_Decker?oldid=1082158"
Community content is available under CC BY-NC-ND unless otherwise noted.