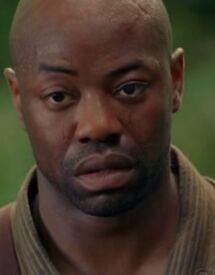 Justin was an Other from the group inhabiting the Temple. He, along with Aldo, was sent to follow Kate and Jin after they agreed to find and bring Sawyer back to the Temple. He appeared to have information about the Ajira crash which Aldo repeatedly told him to stop talking about. Justin stopped Kate from tripping on a wire-trap in the jungle, noting that it couldn't have been Rousseau, as she had been dead for years.

Kate's insistent demands for details as to what Justin was exactly trying to hide made Aldo became defensive and threatening, prompting Kate to knock Aldo out with her water canteen and trigger the wire-trap to knock Justin out with a falling net of rocks and boulders. Kate then took Aldo's weapon and Justin's rifle. A short time later, Aldo threatened to kill Jin as he was walking alone back to the The Temple. Justin said not to, as Jin might be "one of them". Both Aldo and Justin were then shot by Claire in the jungle just before Aldo could shoot Jin. ("What Kate Does")

Later, when Claire discovered that Justin was alive, she took him to her tent, where she interrogated him about the whereabouts of her son. When Claire left to sharpen her axe, Justin, who claimed that Claire was dangerous, told Jin to cut his ropes so that he could kill her. Claire came back before Jin had a chance to do anything, and interrogated Justin once more. Jin asked Claire how she was sure that they had taken her son. She said that her father and her friend told her. She also talked about how she had been tortured and branded by the Others, to which Justin commented that she didn't remember correctly. Jin told Claire that Kate had taken care of Aaron for three years. Afterward, Claire killed Justin with the axe. ("Lighthouse")

Retrieved from "https://lostpedia.fandom.com/wiki/Justin?oldid=1114062"
Community content is available under CC BY-NC-ND unless otherwise noted.