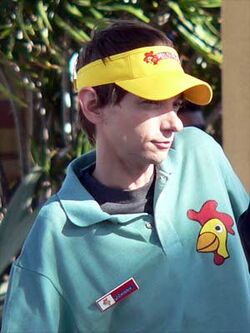 Johnny was a friend and co-worker of Hurley's at Mr. Cluck's. Inspired by Hurley's example, but oblivious to Hugo's winnings, Johnny quit his job as well. The two spent a joyous day together, shopping for music and vandalizing their former boss's yard. Once he learned Hurley had won the lottery, however, he grew resentful, and the relationship never recovered. ("Everybody Hates Hugo")

Retrieved from "https://lostpedia.fandom.com/wiki/Johnny?oldid=1082393"
Community content is available under CC BY-NC-ND unless otherwise noted.