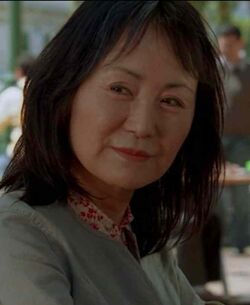 Jin's mother was a prostitute in Namhae, South Korea.

Soon after Jin's marriage to Sun-Hwa Kwon, she blackmailed Sun by threatening to reveal shameful secrets about Jin's parentage. She tells Sun that Jin's father (whom Jin had told Sun had died) was actually alive and was a poor fisherman, and she then told Sun that Jin's mother was a prostitute. She proceeded to ask for one-hundred thousand dollars to keep this dishonorable information secret, as its disclosure would bring Jin and the Paik family great shame and dishonor.

Sun agreed to pay off Jin's mother and brought her the one-hundred thousand dollars in an envelope. Sun then asked her why she didn't tell her that she was in fact Jin's mother. Jin's mother replied that she gave birth to him but she was not his mother. Sun then threatened to have her killed if she was ever heard from again. ("D.O.C.")

Retrieved from "https://lostpedia.fandom.com/wiki/Jin%27s_mother?oldid=1095303"
Community content is available under CC BY-NC-ND unless otherwise noted.