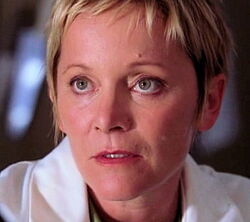 Jill was a butcher who worked in Simon's Butcher Shop in Los Angeles and apparently worked for Ben. She watched Locke's body for Ben while he was out collecting the rest of the Oceanic Six together to return to the Island.

Jill knew about Ben's plan to bring the Oceanic Six back to the Island and confirmed that other elements of the plan were progressing as planned. Ben asked her if Gabriel and Jeffrey had "checked in yet," which Jill confirmed. She made a snide remark about Jack's addiction to pills, and Ben defended Jack, telling her to "cut the man some slack." ("The Lie")

Later, Ben sent Jack to the butcher shop to pick up Locke's body. She addressed him as "Dr. Shephard" and said that she knew who he was. She took him to the shop's cold storage room where the coffin was being kept, then left to get the van for Jack. ("316")

For fan theories about these unanswered questions, see: Jill/Theories

Retrieved from "https://lostpedia.fandom.com/wiki/Jill?oldid=1095712"
Community content is available under CC BY-NC-ND unless otherwise noted.