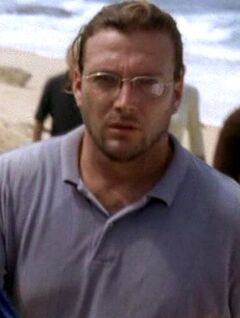 Jerome was a middle section survivor of Oceanic Flight 815. Jerome was an uncredited background extra character, whose name has been inferred from the dialog of other characters. Throughout his appearances he was often depicted by his curly brown hair and glasses.

Jerome member of Locke's group, he was killed on Day 97 by the mercenaries.

The day of the flight Jerome walked past behind Sun while she was contemplating whether or not to leave Jin. Later, he was sitting in a nearby seat at the airport when Sayid asked Shannon to watch his bag for him. ("House of the Rising Sun") ("Exodus, Part 1")

After the crash, he was on the beach and helping other survivors. On the first few days Jerome gathered wood for the mass funeral and helped Claire and other survivors sort wallets and other possession which were strewn across the beach. At night Jerome attended the funeral for crash victims. After, Jack made a decision to move into the jungle and use the caves as a suitable living space, Jerome decided to stay on the beach. ("Pilot, Part 1") ("Walkabout")

On Day 8, Jerome was with Scott and Steve at the beach, when Charlie rushed to the beach to inform the survivors that Jack was caught in a cave collapse. Michael asked Jerome, Scott and Steve to help him. He was then seen trying to help. Jerome was also present for Hurley's "Island Open" golf tournament and Jack's climactic putt.

When Jerome and Craig started to construct a tent at the beach camp, they were yelled at by Sawyer to be quieter as he had a headache. Jerome was recruited by Jack to join him and several other survivors in assisting in the hastened reconstruction of the raft. Jerome, along with all those around him at the raft, saw the Black Smoke coming from across the Island, signaling the approach of the Others. Before the launching of the raft, Jerome wrote a letter and gave it to Charlie to put in his message bottle. Jerome, along with his fellow survivors, then helped get the raft into the water, and was present for the official raft launching. Soon after, Jerome followed Sayid to the caves. ("Exodus, Part 1") ("Exodus, Part 2")

While hiding at the caves, Jerome listened to Jack inform the group about the Hatch and and assure them that they were going to be safe if they all stuck together for the night. In the morning Jerome returned to the beach along with the other survivors, and unpacked his stuff. The next day, Hurley passed out the food from the Hatch to Jerome and the group. ("Man of Science, Man of Faith") ("Everybody Hates Hugo")

Jerome welcomed the return of Jin, and the new additions of Bernard and Libby, when they arrived at the survivors' camp. The next day, he attended Shannon's funeral. A few weeks later a pallet of DHARMA food and supplies was found on the Island. Jerome stood beside Sawyer in the forest while handing out DHARMA food at the supply drop. The next day Jerome was shown speaking with Richard and Craig, when he was chosen by Bernard to help construct his SOS sign; this scene is the only occasion that Jerome is referred to by name. Jerome seemed to opt not to participate in the construction of the sign. During the discharge, Jerome held his ears and helped clean up the resulting debris. ("Dave") ("S.O.S.")

Jerome was exchanging items with Desmond the day Nikki asked Sawyer for a gun. Later that day Jerome was one of many survivors who attended Nikki and Paulo's funeral. The next day he ate some of Sawyer's boar roast. When Jack, Sayid, and Kate returned to the camp from escaping from the Others, Jerome was there to greet them. He and the rest of the survivors were shocked to see Juliet coming to their camp and sleeping in their tents. At night time, when Jack was talking to the survivors on getting rescued, Jerome was there to help Claire to her bed tent.

Jerome celebrated with the other survivors while waiting for rescue. Before journeying to the cockpit, he was seen packing. When the group reached the cockpit, the factions separated and Jerome chose to join Locke's group at the Barracks. The next day, he was seen walking to the barracks along with the rest of Locke's people. Before the attack by Martin Keamy's mercenary team, Jerome is seen walking around the Barracks. When mercenary team invaded the Barracks, Sawyer was en-route to Claire's house when he came across Doug, who was quickly shot by an unseen member of the team. The blonde woman then ran out of her house to find out what happened, but was also shot and killed. Immediately after, Jerome also ran out to help, but he too was also shot and killed by an unseen mercenary. ("The Beginning of the End") ("The Shape of Things to Come")

The name "Jerome" was only mentioned in "S.O.S." by Bernard, as taken from both the United States closed captioning and DVD subtitles:

Although it may be deduced for these reasons that this character's name is "Jerome", this labeling of this specific background actor (Jim Mazzarella) is probably not a decision of the writers or casting department; therefore, any narrative of this individual's biography should be considered a fan-creation.

Retrieved from "https://lostpedia.fandom.com/wiki/Jerome_(survivor)?oldid=1113338"
Community content is available under CC BY-NC-ND unless otherwise noted.