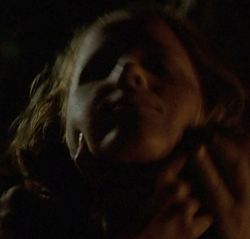 Jennifer was one of the Others who attacked the tail survivors camp for a second time on day 12. She tackled Ana Lucia when she tried to stop the Others from taking Zack and Emma, but Ana Lucia then struck her with a rock and killing her. After her death, Ana Lucia found a list with the names of the survivors they kidnapped, and a U.S. Army knife in her pocket. ("The Other 48 Days")

Jennifer's name was mentioned by Ben during a conversation with Ana Lucia in the original script of "Two for the Road". However, the scene was deleted in the episode. [1]

Retrieved from "https://lostpedia.fandom.com/wiki/Jennifer_(Other)?oldid=1116025"
Community content is available under CC BY-NC-ND unless otherwise noted.