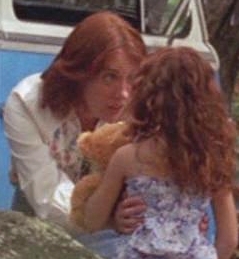 Jeanette Lewis is the mother of Charlotte Lewis and a former member of the DHARMA Initiative.

On July 2, 1971 in Essex, England, Jeanette Lewis gave birth to Charlotte Lewis, whom she most likely had with David Lewis. They raised her and their two other children (both girls) in Bromsgrove, Worcestershire, England (although this is at least partially a lie, since Charlotte admitted that she lived on the Island during her early childhood). ("Confirmed Dead")

A British woman, presumably Jeanette, was seen alongside three-year old Charlotte in 1974. ("LaFleur")

Three years later, she was seen once again while leaving the Island with Charlotte on the submarine in 1977, on orders from Dr. Chang. ("Follow the Leader")

After leaving the Island

When Charlotte grew older, she tried to mention the Island to her mother, but Jeanette replied that it was a figment of her imagination. ("This Place Is Death")

On the Island, Charlotte, while suffering from temporal displacement, noted that she couldn't remember her mother's maiden name. ("The Lie")

For fan theories about these unanswered questions, see: Jeanette Lewis/Theories

Retrieved from "https://lostpedia.fandom.com/wiki/Jeanette_Lewis?oldid=1116067"
Community content is available under CC BY-NC-ND unless otherwise noted.