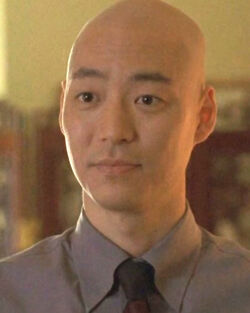 Jae-Young Lee (이재영) was the wealthy son of the owner of the Seoul Gateway Hotel, and most likely would have gone on to manage and own the hotel himself someday had he not taken his own life.

He attended Harvard and studied Medieval Russian Literature, where he met and fell in love with an American woman. He met Sun on a family-arranged date, but told her he wasn't interested because of his previous love, which apparently failed. ("...And Found")

He taught Sun English (at her request), and ended up having an affair with her. He gave her a strand of pearls and asked her to leave for America with him. ("The Whole Truth")

Mr. Paik found out about the affair, but instead of telling Jin about it, lied to Jin and told him Jae was stealing from him, addressing this in terms of "honor". He ordered Jin to "deliver a message" to Jae (i.e., kill him). Jin found him and assaulted him, but couldn't bring himself to kill Jae, so he told him to leave the country and never return. ("The Glass Ballerina")

Jae Lee ended up committing suicide (Oct. 30, 2006 Official LOST Podcast), falling from many stories high, landing on Jin's car with the string of pearls he attempted to give Sun clutched in his hand. ("The Glass Ballerina")

Retrieved from "https://lostpedia.fandom.com/wiki/Jae_Lee?oldid=1114272"
Community content is available under CC BY-NC-ND unless otherwise noted.