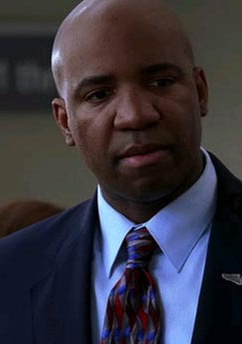 JD was an Oceanic Airlines flight attendant aboard Oceanic Flight 815. He appears to be of American origin.

JD helped several disabled and handicapped passengers onto the plane, including Locke. He came up with the idea of carrying Locke to his seat when the special wheelchair for loading the disabled passengers went missing. JD and Michelle carried Locke onto the plane, unknowingly humiliating him in the process. ("Exodus, Part 2")

During the flight, JD was confronted by Cindy and was notified about a passenger's strange behavior. JD and Cindy followed the unruly passenger as he moved towards the front of the plane. As the passenger hid in a bathroom, the plane began experiencing turbulence prior to the mid-air break-up. ("Pilot, Part 2")

JD made it to the tail end just before the plane broke in half and crashed into the sea. He was killed along with some 200 passengers and crew.

Retrieved from "https://lostpedia.fandom.com/wiki/JD?oldid=1106643"
Community content is available under CC BY-NC-ND unless otherwise noted.