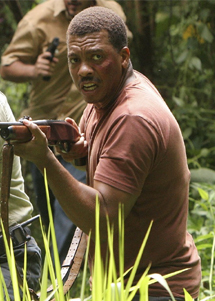 Ivan was one of the Island's natives who had medical training, as he helped with part of Benjamin Linus's surgery in 2004.

One of the Island's "natives" colloquially known as the Others, Ivan was one of several individuals who helped populate the decoy village that Michael Dawson was brought to in 2004. Some weeks later, Ivan assisted in escorting Oceanic Flight 815 survivors Jack Shephard, Kate Austen, Sawyer Ford, and Hurley Reyes to the Pala Ferry dock following their capture. ("Three Minutes") ("Live Together, Die Alone, Part 1") A witness to the after effects of the Swan's explosion, Ivan aided in the transport of the hostages to Hydra Island, where he was stationed for the next few weeks. Escorting Austen to her breakfast with Linus, he later helped Tom Friendly carry Sawyer Ford back into his cage following a failed breakout attempt. ("A Tale of Two Cities")

Described as one of the best ten men amongst the natives' defensive teams, Ivan was part of Colleen Pickett's strike team sent to assault the Elizabeth. Encountering Sun-Hwa Kwon, he witnessed Pickett's death and failed to kill Kwon afterward.("The Glass Ballerina") Returning to the Hydra station, Ivan was part of Shephard's operating team during the removal of the tumor on Ben Linus' spine. During the operation, Shephard sabotaged the operation and attacked Ivan in order to assist his friends' escape attempts. ("I Do") Following the attack, Ivan was dispatched by Juliet Burke to locate Danny Pickett and help find the missing Austen and Ford. Discovering that Pickett and Jason were locked in the cages by their former prisoners, Ivan released them and aided in the pursuit through the jungle. Losing sight of their targets as they hid in a hiding spot built by Alex Linus, they continued down to an extension of the Hydra complex where they found the unconscious Aldo. Coming to, Aldo informed them that the fugitives had freed Karl Martin from his holding cell in the complex and had gone to the beach. At this point, Pickett left his two companions and continued the search himself. ("Not in Portland")

Having returned to the main island and the Barracks soon after Pickett's death, Ivan was selected by Ryan Pryce to accompany him to the beach camp of the Oceanic survivors. During the attempted raid, Ivan was killed when one of the rigged tents exploded upon his approach. ("Through the Looking Glass, Part 1")

Of Russian and Slavic origin, Ivan means "God is gracious" and is a variant of the Hebrew name John. In the end credits of "The Glass Ballerina", Teddy Wells was merely credited as "Other", but by the episode "I Do", he was credited as Ivan.

The same actor was also an uncredited background extra in "Orientation" during John Locke's flashback as one of the members in his anger management group. The camera hits him for a flash when Locke begins to tell everyone that they "feel" too much. Again the actor is uncredited for his appearances in the season two episodes "Three Minutes" and "Live Together, Die Alone, Part 1".

Retrieved from "https://lostpedia.fandom.com/wiki/Ivan?oldid=1093454"
Community content is available under CC BY-NC-ND unless otherwise noted.