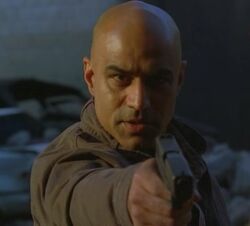 Ishmael Bakir (Arabic:إشماعيل باكر) apparently worked for Charles Widmore, but it is unknown in what capacity.

Bakir was first seen as Ben surveyed Nadia's funeral with a camera. Bakir watched the proceedings with seeming disinterest, drinking coffee as the procession walked by. Upon Ben's discovery by Sayid, Ben shows him a picture of Bakir in a car at a streetlight, allegedly speeding away from the place where Nadia was killed. Ben convinced Sayid that Bakir worked for Charles Widmore and that he had been responsible for Nadia's death.

Ben later spied on Bakir from a cafe, while Bakir was reading a newspaper. Bakir suddenly left, and Ben followed closely behind, eventually losing Bakir to the crowd of people. However, Bakir had doubled back, and held Ben at gunpoint, forcing him into a dark alley, where he began to question Ben. Ben instructed Bakir to give a message to Widmore. Suddenly, Sayid appeared and shot Bakir multiple times until the ammunition ran out of his gun. After Bakir fell to the ground, Sayid then stated that he wished to work for Ben. ("The Shape of Things to Come")

Retrieved from "https://lostpedia.fandom.com/wiki/Ishmael_Bakir?oldid=1106406"
Community content is available under CC BY-NC-ND unless otherwise noted.