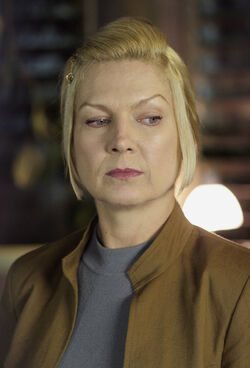 Isabel was a one of the island's native inhabitants living on the Island during the years surrounding the crash of Oceanic Flight 815. Known as "the sheriff" amongst her people, she held an investigative role amongst the natives.

Following the death of Danny Pickett at the hands of Juliet Burke and allegations of her attempted murder of Benjamin Linus, Isabel arrived on Hydra Island and was placed in charge of the investigation and had Burke placed under arrest. Hunting for leads, Isabel visited the cages where Jack Shephard was being held and took him to Linus' office for questioning. Joined by Tom Friendly and Burke, Isabel asked Shephard several questions regarding Burke's alleged murder attempt. Retracting his earlier statement to Friendly regarding Burke's plot, Shephard lied and said that it was a ruse to create chaos amongst the hierarchy of the island's natives. Seeing through Shephard's lies, Isabel was at a loss for why he would lie for Burke, but she never received an answer. ("Stranger in a Strange Land")

Not long after, Isabel concluded the investigation and gathered her people together for the reading of her verdict. During the proceedings, Shephard and Linus' daughter Alex interrupted the meeting with an order from Linus, who had placed a stay on the execution of Burke and substituted marking her instead. Later that day at sunset, Isabel recited the supposed translation of Shephard's tattoo, saying, "He walks among us but is not one of us." The doctor replied, "That's what it says, but it's not what it means." With that, the group stationed at Hydra Island, left on a yacht and departed for the Barracks. ("Stranger in a Strange Land")

While the events surrounding her death are unclear, Isabel was killed sometime before she could depart with those of her people heading for the Temple. (Lost Encyclopedia)

At the end of Season Three, the producers confirmed that she, and several of the Others, were dead. Damon Lindelof stated this via a clip from the third season DVD that was shown at Comic-Con 2007. It was also mentioned on the August 2 podcast.

No further explanation of her death was given, except to say that it was "housecleaning". There was an implication that she may have been one of the Others killed in the tent explosions at the beach. ("Through the Looking Glass, Part 1") (The World of the Others)

Not to be confused with Isabella, Isabel is of Spanish and Latin origin; a variant of Elizabeth; Hebrew for "God's promise".

For fan theories about these unanswered questions, see: Isabel/Theories

Retrieved from "https://lostpedia.fandom.com/wiki/Isabel?oldid=1104259"
Community content is available under CC BY-NC-ND unless otherwise noted.