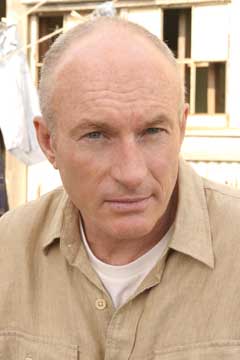 Isaac of Uluru was a faith healer who lived in the Australian outback near Uluru, which is a very large stone monolith in central Australia.

Isaac had a room decorated with canes, walkers and wheelchairs, apparently belonging to people whom he had healed. He also had a wall filled with pictures, postcards, and thank you letters from his former clients. One of the recurring images on two cards on the wall is a Buddhist symbol called the dharmacakra. Isaac claimed that his home was above a geological "place of power" and that he used it to heal.

Bernard brought Rose to Isaac to be healed of cancer and donated 10,000 dollars for that purpose. Isaac failed to heal Rose, saying that she needed a different place, and he didn't know where that was. Isaac offered to repay Bernard's money, but Rose declined this offer, telling him she wanted Bernard to think that she was successfully healed. ("S.O.S.")

Bernard showed Rose an article about Isaac in the tabloid The National Flash:

"Australian based spiritual healer Isaac of Uluru has been helping to ease pain and to restore people's health as a spiritual healer and masseur for more than 25 years. Born in 1949, Isaac has been in demand for many years for the remarkable results he has achieved in helping people recover from injuries, health issues, emotional issues and so called incurable physical and mental diseases.

Isaac's Healing Powers
Spiritual Healing is effected by the act of attuning to the Life Force Energy, by meditation or prayer, so this energy can be channeled via the agency of a trained Spiritual Healer to any person, place, situation or life form, whether present or not via contact by the Hands or by the projection of Loving Thoughts in order to have a beneficial effect on the whole, at all levels of Being.

Distinctions of race, class, gender, custom belief, philosophy or religions are irrelevant; no affirmation of religious faith is required. Spiritual Healing may be given to any person, place, situation or life form; for any illness, injury, problem or circumstance, at any time."

There are many myths pertaining to Uluru and the mysterious formation of the giant monolith. One myth recounts that two tribes of ancestral spirits were invited to a feast, but were distracted by a beautiful Sleepy Lizard Woman and did not show up. In response, the angry hosts sang evil into a mud sculpture that came to life as the dingo. There followed a great battle, which ended in the deaths of the leaders of both tribes. The earth itself rose up in grief at the bloodshed, becoming Uluru.

It is also often stated that those who take rocks from the formation will be cursed and suffer misfortune. This is because spirits of people who have died on or around Uluru are believed to be bound to the area forever, and stealing from Uluru disturbs their death.

Every year hundreds of tourists who have visited Uluru and stolen rocks from the site send the rocks back believing they have been cursed. [source needed]

Retrieved from "https://lostpedia.fandom.com/wiki/Isaac_of_Uluru?oldid=1095721"
Community content is available under CC BY-NC-ND unless otherwise noted.