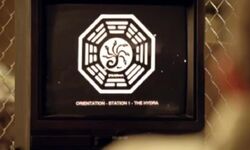 The Hydra Orientation film was a DHARMA Initiative produced film that was shown to new personnel working at the Hydra station. ("The New Man in Charge")

Dr. Pierre Chang explains in the film that the station is used to conduct biological and behavior research on animals, like birds, sharks and bears, and he talks about the work that they're doing in the station, like the genetic alteration in the "hy-birds" and study the adaptation of this animals. Also, he explains the function of the polar bears in the Island, their adaptability and intelligence makes them the best candidates for the experiments of electromagnetism, when they are ready they're transported to the Orchid station for their next stage of the research.

In the station, humans are studied too, the workers of the DHARMA Initiative capture and sedate the indigenous people of the Island, and take them to Room 23, where security personnel of the DI interrogate them. The purpose of the research is to understand their way of life, their origins and devotion to Jacob, whom the Initiative believes to be a deity. Afterwards, they are drugged and subjected to a brainwash film to create an amnesia effect. They can't violate the truce between the organization and the Hostiles.

It is not known when Chang recorded this film, and the available information seems to suggest several different possibilities:

Moreover, since the film contains several splices, and Dr. Chang is wearing different lab coats in different segments, it is possible that different portions of the film were made on different dates. However, this by itself would not resolve the apparent contradictions in dating, since his arm appears to function perfectly well in all segments of the film.

As Ben first starts to play the DVD, he apologises for the quality, saying it is a, "...transfer from an old betamax". By this he means it is transferred from a betamax video tape cassette. Yet the video images show scratches and dust marks typical of an old celluloid film. In Season 5 "Because You Left", we saw Chang being filmed for an orientation film, using a film camera. Therefore this Hydra Orientation film was originally created on celluloid film, then transferred to betamax video cassette (possibly in 1980, as per the copyright seen on other orientation films), then recently transferred onto DVD. The image quality is likely due to frequent use of the original film, and then use and degradation of the betamax video.

Retrieved from "https://lostpedia.fandom.com/wiki/Hydra_Orientation_film?oldid=1116627"
Community content is available under CC BY-NC-ND unless otherwise noted.