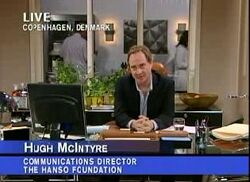 Hugh McIntyre was the Communications Director of the Hanso Foundation, in the storyline of the alternate reality game The Lost Experience, and made several "real" appearances: He wrote to dismiss the "false information" made in the novel Bad Twin by means of a public announcement in national (USA) newspapers on May 9, 2006. He also appeared on the Jimmy Kimmel Live! television program.

According to Persephone, he cheated on his wife but this has been refuted by him on the program. However, new information from Rachel Blake revealed that he has been having an extramarital affair with the Corporate Liaison of the Global Welfare Consortium, Darla Taft, who turned out to be GidgetGirl, one of Rachel Blake's informants.

McIntyre died along with Taft in an automobile 'accident'. See Rachel Blake's post for more information on their deaths. McIntyre was married and apparently had a daughter named Megan.

"A veteran U.N. translator with an extensive background in public relations, Communications Director Hugh McIntyre serves as the public voice of The Hanso Foundation.

Abiding by his motto, "accuracy and transparency above all," McIntyre ensures The Hanso Foundation's global partnerships are maintained with the same respect Alvar Hanso has for humanity as a whole.

Deeply committed to family values, McIntyre sits on the boards of several international family organisations and ensures that the message of The Hanso Foundation in always in alignment with its founder's mission." (from www.thehansofoundation.org)

Also of interest is a message from "Darla", saying "Hugh, it's Darla. I need to talk to you about Sri Lanka, it just isn't right."

A press release was added to the main Hanso Foundation site, viewable here. In the release, Hugh apologized for recent vandal activity on the Hanso website, promising to right the problems as quickly as possible.

A letter dated May 9th was discovered, sent from McIntyre to Robert Miller, head of Hyperion Publishing, demanding a public apology for allegations against the Hanso Foundation, insinuated by the novel Bad Twin. See Hyperion Publishing for the full letter.

On the Hanso Foundation website, Persephone devoted a full hack to Hugh McIntyre. Her hack was accessible under his profile, using the password "the mouthpiece". This opened a flash video giving evidence that Hugh was having an extra-marital affair. Photos and a short video showed Hugh with his mistress, and hotel and shop receipts backed up the claim.

McIntyre appeared on the Jimmy Kimmel Live! show, Wednesday, May 24th 2006. Below is the full video, with notes underneath showing key points.

In her third Copenhagen blog, Rachel Blake continued the subject of Hugh's infidelity by publishing pictures she had taken of him and his mistress in Copenhagen. The pictures showed a comparison between the mistress and Hugh's wife, clearly different individuals. They also showed that the mistress was a liaison with the Global Welfare Consortium - a group supposed to regulate companies like the Hanso Foundation. Rachel wrote about her concern that the Foundation was trying to silence the influence of the GWC by infiltrating it.

Rachel was asked by an unknown user to remove the images. It was later revealed that this user was Darla Taft, the mistress she had photographed. Darla helped Rachel learn more about the Foundation, using her influence with Hugh.

In her first France blog, Rachel learned that Darla and Hugh had both been killed in a car "accident". In her video, Rachel read out the story from an Internet article:

Rachel surmised that the crash was no accident, and that the Hanso Foundation had learned of Darla's betrayal and killed both she and Hugh to tie up loose ends.

After a tip off from a contact, Rachel visited Darla and Hugh's secret flat. In her blog, she posted a video of herself creeping round the apartment. On the table she finds a note written by Hugh to "Gidget", seemingly a message he left for Darla the day he died:

Rachel then finds a videotape from Darla, which she had intended for her to find before losing her life. On the tape, Darla appears, and mentions Hugh directly (see full video):

Retrieved from "https://lostpedia.fandom.com/wiki/Hugh_McIntyre?oldid=1116006"
Community content is available under CC BY-NC-ND unless otherwise noted.