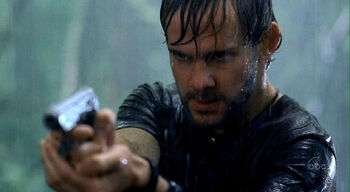 "Homecoming" is the fifteenth episode of Season 1 of Lost and the fifteenth produced hour of the series as a whole. The happiness of Claire's return is short-lived as the survivors realize that she is suffering from amnesia. Ethan returns, demanding he get Claire back or he will kill the rest of the group, one by one. Flashbacks in this episode feature Charlie's new romance with Lucy Heatherton.

Charlie and his friend Tommy use heroin, and discover that they are running low on money. In a bar, Tommy points towards a girl named Lucy and tells Charlie that her father is rich. Charlie walks over and makes conversation with Lucy. ♪

Later, Charlie wanders through Lucy’s home. Lucy shows him a cigarette case once owned by Winston Churchill. Over dinner, Charlie tells Lucy's father that he once was part of a band, but Drive Shaft now is "dead." It seems like Charlie begins to like Lucy, although he cons her and her father.

Charlie tells Tommy he has taken a job working for Lucy’s father selling copy machines. Tommy reminds Charlie of their addiction, and assures him that he would not survive a whole weekend without some "fix."

Charlie eventually gives in to his addiction, stealing the cigarette case that belonged to Churchill. And rather than slipping away from the job and getting his fix, Lucy gives him a briefcase and insists on driving him to his job. ♪

His plans to become respectable backfire as he suffers withdrawal symptoms. On his first day of work, he passes out after throwing up under the lid of one of the store photocopiers.

When Charlie goes to see Lucy to explain, she refuses to hear his explanation, and informs him she knows about his con because the cigarette case was found in his jacket. Before closing the door in his face, she tells Charlie he will never take care of anyone.

Charlie awakens to see Locke carrying Claire to Jack. Claire wakes up and panics, asking, “Who are you people?” The last thing Claire claims to remember is the flight from Sydney, almost a month ago. Jack fills her in on the events since the crash. Sun and Jin watch from the sidelines, and Jin wonders if the baby is okay. Sun looks thoughtful and says she's sure the baby is fine.

Charlie hands Claire her diary, saying he hopes it will help Claire remember what happened to her. When he tells her about the day they were taken by Ethan, she asks him who Ethan is. Charlie says Ethan is the bad guy. When Charlie suggests they stay awake together, Claire asks if they are friends. Charlie responds that they are. ♪

Jack, Locke, Sayid, and Charlie discuss the chances of Claire's memory returning. In the jungle, Charlie meets Jin and they walk together. As Charlie is sarcastically talking to Jin about how great it must be for him to not be involved with anything happening on the island, they hear something whooshing through the trees and Jin is knocked out by a rock.

Ethan confronts Charlie, telling him he wants Charlie to bring Claire back. Charlie tries to attack him, but Ethan grabs him by the neck, threatening to kill one castaway every day until he gets Claire back. And after he kills them all, he will come for Charlie last.

Charlie tells Jack and Locke about Ethan's threat, and suggests they all go after him and kill him. Locke says they should start thinking about defense. He makes four booby traps around the perimeter and puts some of the survivors on guard during the night. Boone volunteers to take the first shift. Meanwhile, Sun takes care of Jin's wounds and asks him if everything is all right. Jin says he was attacked because of what the others had done.

Claire is uncomfortable about what is going on around her, and feels like the other survivors are avoiding her. Charlie lies and assures her there isn't anything going on.

That night, Locke, Sayid, and other survivors stand on guard. Boone falls asleep during his shift.

The next day he wakes up after he hears a sprung booby trap. He rushes to see who has triggered the alarm and hears a rustling noise from the tree line. He runs toward the noise, but falls. ♪ It is discovered it was only Vincent who tripped it, but Boone, Sayid, and Locke hear screaming and return to the beach to find that Scott has been murdered. His neck, both arms, and all the bones in his fingers had been broken. According to Locke, Ethan had probably come in from the ocean.

After the burying ceremony ♪, Claire finds out from Shannon why everybody is avoiding her. She yells at Charlie, who says he only wanted to take care of her. She responds that she takes care of herself.

Jack decides it's time to reveal he has guns. He first shares them with Locke. ♪ With the guns from the briefcase and Claire as willing bait, Jack, Locke, Sayid, and Sawyer set a trap. Charlie wants to take part, but when John asks Charlie if he has ever fired a weapon, Charlie does not respond. Kate also wants to come, but Jack explains they are out of guns. Sawyer gives her the gun he found on the Marshal's body, "back in the old days," and says five guns are better than four.

Sayid instructs everyone, and says they want to capture Ethan alive to interrogate him and possibly get some information. In the jungle, the five of them hide in the trees, while Claire stands on the path, waiting for Ethan to arrive. Ethan finally shows up and starts to chase Claire. Jack tackles Ethan and they fight. Jack drops his gun, but gains the upper hand and holds Ethan to the ground. Suddenly, a vengeful Charlie shoots Ethan in the chest and kills him, using the gun Jack had dropped. ♪

The next day, when Jack asks Charlie why he did it, Charlie tells him that Ethan deserved to die, and he was not going to let that animal anywhere near Claire again. ♪ Claire comes to Charlie and tells him she remembers peanut butter. Charlie corrects her, saying that it was actually imaginary peanut butter. She tells Charlie that she doesn't know what happened to her, and she's scared, but she "wants to trust him." They wish each other good night. ♪

The episode's statement of Claire's theme appears on the Season 1 soundtrack as "We're Friends". The soundtrack also features the cue from Ethan's capture, "Getting Ethan", which forms a motif for the character.

The episode introduces half a dozen other motifs as well. One characterizes Ethan and other enemies. One action motif plays during the preparation to Ethan's capture, and another characterizes Jack's fights with the Others. A suspense motif later opens several scenes, and and a cue that plays towards the end of the episode characterizes several scenes of regret. Finally, Charlie's flashbacks in this episode have their own motif.

Retrieved from "https://lostpedia.fandom.com/wiki/Homecoming?oldid=1093513"
Community content is available under CC BY-NC-ND unless otherwise noted.