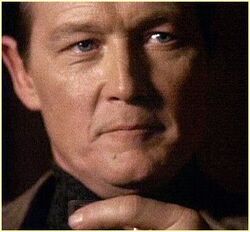 Hibbs was a past associate of James "Sawyer" Ford, who worked with him on the Tampa Job. Hibbs provided Sawyer with the information that the real Sawyer was a man named Frank Duckett who was residing in Australia. Hibbs was lying, however, using Sawyer to kill Duckett because he owed Hibbs money. ("Outlaws")

Sawyer carried Mary Jo toward his bed as a light in the room was suddenly turned on by Hibbs in order to make his presence there known. Sawyer asked Mary Jo to go down to the bar to get a drink so he could speak to Hibbs alone, telling her he would explain later. As Hibbs began commenting on how Sawyer found such a beautiful woman, Sawyer grabbed him and pinned him against a wall, reminding Hibbs he was told he would be killed the next time Sawyer saw him.

Hibbs quickly explained he was there to make things right, to make them "even for the Tampa Job," and threw an envelope on the table for Sawyer to examine. The envelope contained a photo of Frank Duckett, the man Hibbs explained was actually "Frank Sawyer," the man who he said killed James' parents.

On Hibbs' tip, Sawyer went to Australia to confront Duckett. Sawyer went to Duckett's Shrimp Stand, and traded banal conversation while he bought a hot shrimp basket, but he left without taking the food as Duckett's back was turned and went to a bar instead. Sawyer returned later that night with his Dutch courage, and confronted Duckett, shot him, and began reading him a letter. Duckett, confused about being called "Sawyer," suddenly made the connection, and as he lay dying, he told Sawyer to "tell Hibbs I would've paid." Sawyer questioned how Duckett knew Hibbs, and then realized when Duckett repeated "I was going to pay," that Hibbs had set him up to kill Duckett, and that the supposed connection to the man who killed Sawyer's parents was a lie.

It is uncertain what Sawyer would have done in retaliation, because Flight 815, which was returning Sawyer to the United States, crashed on the Island.

Retrieved from "https://lostpedia.fandom.com/wiki/Hibbs?oldid=1102603"
Community content is available under CC BY-NC-ND unless otherwise noted.