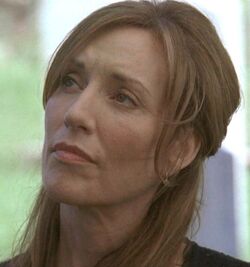 "Helen" redirects here, for other uses of this term, see Helen (disambiguation).

Helen Norwood was Locke's girlfriend for a period during his life before the plane crash, whom he had intended to marry. After Locke returned to the mainland in an attempt to bring back the Oceanic Six, Matthew Abaddon revealed that she had died of a brain aneurysm in 2006.

Locke and Helen met at an anger-management support group of which they were both members. After his outburst at the group about their whining, Helen approached Locke outside and told him that she appreciated his candor and shared his frustrations. She also flirted by telling him that she liked bald men - despite Locke not being bald she said that she was prepared to wait.

Their friendship moved to the bedroom fairly quickly and continued to blossom. During a meal at a restaurant, Helen gave Locke a key to her flat as a six-month anniversary present. She told him that she'd followed him and discovered that he was sneaking out at night to lurk outside his father's house. The gift of the key was given on the condition that he stopped going there, to which Locke agreed.

Despite his promise to stop, Locke continued to spend long periods in his car waiting outside Cooper's house. Helen followed him again and shunted her car into the back of his, stormed over to his window and snatched his keys from the ignition. She threw the keys over the security gates in the drive and implored him to give up on his obsession and take a "leap of faith" with her. Shortly after, Locke moved in with Helen. ("Orientation")

Locke eventually started making plans to propose to Helen over a romantic picnic. Unfortunately on the morning of the picnic Helen spotted Anthony Cooper's obituary in the newspaper and that the funeral was scheduled for that day. Helen accompanied Locke to the funeral to support him.

Some days after the funeral, Cooper revealed to Locke that he was still alive and convinced him to participate in a criminal financial scheme in exchange for a share of the money. Locke's suspicious behavior and a run in with some crooks searching for Cooper led Helen to follow him again. She turned up at the motel, where Locke was meeting Cooper to hand over the money. She demanded of Cooper: "Are you him?", slapped him and berated him for his treatment of Locke before leaving to go back to her car. Locke caught up with her in the parking lot outside and pleaded for forgiveness, went down on one knee and proposed. Helen shook her head and drove off. ("Lockdown")

Some time afterward, Locke began calling a phone operator he called Helen with whom he developed an obsession. ("Walkabout")

After having crashed on the Island, during a brief moment of confusion after being knocked over by a boar, Locke shouted out at Kate, calling her "Helen." ("Walkabout")

On April 8, 2006, Helen died of an apparent brain aneurysm. She was buried in Santa Monica, California.

After he returned from the Island, Locke used the assistance of his driver Matthew Abaddon to track down Helen's whereabouts. To Locke's dismay, he discovered that she had died and was buried in a Santa Monica cemetery. ("The Life and Death of Jeremy Bentham")

In the flash sideways, Helen and John were engaged and planned on getting married in October 2004.

Being very sick of the wedding planning, caterers, bands, and picking out fabrics for chair backs (both a shade of green), she asked John if they can "do it shotgun style" in Las Vegas instead. She also mentioned taking her parents and John's father with them, to which John replied that Helen deserved better and he knows everything will be done.

She was a woman of faith, believing that John meeting Jack Shephard (a spinal surgeon from the same flight) may be destiny and thinks that John should call him. The next day she overheard John on the phone with Dr. Jack Shephard's office but he hangs up. She was glad John called and wanted to know when he was getting a consultation from Dr. Shephard.

John initially lied to Helen about skipping the conference in Australia, but eventually confessed that he was fired from the box company. When his case of lost knives was returned, he told Helen to open the case and explained what happened when he tried to go on a walkabout but was not allowed to go. John acknowledged that he knows, she wanted him to go to more consultations about his back and "needed him to get out of this chair", but also shared with her that he doesn't want her to wait for a miracle, because he believed no such thing existed. She replied there are miracles, but assured him that he was the only one she ever needed, and ripped up Jack's business card. ("The Substitute")

After Locke's hit and run accident, Helen rushed to her fiance's bedside at St. Sebastian hospital. She thanked Dr. Shephard as the two embraced. ("The Candidate")

After Locke was cured of his paralysis and his memories of his former life were restored, he "moved on" without Helen. ("The End")

Retrieved from "https://lostpedia.fandom.com/wiki/Helen_Norwood?oldid=1114954"
Community content is available under CC BY-NC-ND unless otherwise noted.