Start a Wiki
"Hearts and Minds" 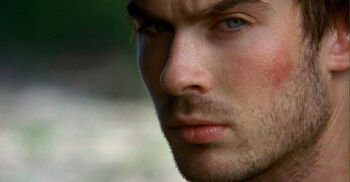 "Hearts and Minds" is the thirteenth episode of Season 1 of Lost and the thirteenth produced hour of the series as a whole. As Boone becomes increasingly jealous of Shannon's relationship with other survivors on the Island, Locke hatches a plan to make him realize that he should let go. Meanwhile, Hurley attempts to acquire food supplies for the group. Flashbacks in this episode center around Boone and Shannon's time in Australia and what they were doing there.

At a posh tennis club, Boone is leaving the court with a lady friend, when he gets a call on his cell phone from Shannon. She's crying, and shouting is heard in the background. She begs Boone for help, asking him to come and get her. Boone asks her where she is, and she answers "Sydney."

Boone knocks on the door at a house, and Shannon's boyfriend Bryan answers. Boone enters looking for Shannon and when she comes in the room, she looks surprised to see him. Boone reminds her of her frantic call, but she clams up and asks him to leave. While Bryan has his back to her, Shannon pulls back her hair to reveal a large bruise on her face.

While Boone attempts to file a complaint against Bryan at the Australian police station, Sawyer is brought into the station in the background while the detective and Boone chat. The detective reveals Shannon and Boone are in fact not blood related, but step-siblings, as his mother married Shannon's father when they were children. The police can't help Boone, so he decides to take another approach. He finds Bryan at work on the docks and tells him to get out of Shannon's life. When Bryan scoffs, telling Boone that he loves Shannon, Boone decides to get to the point and asks what his love is worth. Showing his true colors, Bryan names his price: $50,000 US dollars.

At the same house in Australia, after paying Bryan off Boone goes to collect Shannon and her things, but Shannon looks guilty. Bryan comes into the room and lays it all out for Boone. Shannon orchestrated the whole drama in an attempt to get money from Boone's mother. Boone is humiliated and lets his emotions get the better of him, resulting in a fight between Bryan and him. Boone leaves the house bloodied and rejected.

Later, at Boone's hotel room in Sydney, Shannon knocks on the door. She tells him that Bryan took off with the money and now she has no place to go. Shannon comes close to Boone, telling him that she knew he would bring the money because he is in love with her. Boone says she is drunk and crazy, but she comes closer and closer and Boone can't help himself. They fall into a passionate kiss and have sex. The next morning, Shannon is cold towards Boone and tells him she wants things to go back the way they were, regardless of Boone's feelings.

Boone stares at Sayid, who is enjoying an easy conversation with Shannon. Hurley interrupts Boone, asking him why he and Locke haven't brought back any boars lately. Boone, offended, tells Hurley that hunting boar isn't as easy as he thinks. Hurley reminds Boone that everybody needs protein, and that living in this place isn't a game.

Boone confronts Sayid and tells him to stay away from his sister. Sayid isn't intimidated, but Boone isn't backing down either. Before the situation escalates, Locke calls Boone away, saying they have work to do. While trudging through the jungle, Locke counsels Boone not to make an enemy out of Sayid -- they are going to need him on their side later. For now, the important thing is to get back to the Hatch. ♪

Hurley finds Jack and asks him if he has anything to help his upset stomach. Jack asks Hurley a few questions and learns the cause of his distress: Hurley has been eating nothing but fruit for the last week and his stomach is starting to complain. Hurley says they need protein, but there hasn't been any boar. Jack tells him to go and ask Jin for some fish, but Hurley tells Jack that Jin has it in for him because he refused to eat the sea urchin Jin caught the day after they crashed. Later, when Jack recounts the conversation to Kate, she offers about a more disturbing possibility for the lack of boar meat lately: "What if Locke is not catching them on purpose?"

Back on the beach, Hurley's desperation forces him to approach Jin. He asks him to teach him how to fish, but Jin has no idea what Hurley is saying. Still, as Jin walks to the water for the day's fishing, Hurley follows close behind.

Boone and Locke discuss how they can open the Hatch. ♪ Boone tries to convince Locke to tell the others about their discovery. If not everyone else, at least Shannon. Locke tells Boone she isn't ready to know and telling her now will only cause problems, but Boone insists -- he's going to tell her when they get back to camp. Locke feels that Shannon has too large an influence over Boone's life, asking if he's sure, but tells him the decision is his. But when Boone starts off again down the trail, Locke whacks him over the head with the handle of a knife, knocking him out cold. ♪

Boone wakes up to find himself tied to a tree. Locke sits before him, mixing a strange concoction in a coconut bowl. Boone begs Locke to untie him, but Locke refuses. He approaches Boone and spreads some of his concoction over Boone's open head wound. Locke tells Boone that he is on his own and he leaves a knife just out of Boone's reach. "You can cut yourself free and make your way back to camp," Locke says, "With the proper motivation."

Kate and Sun are working in a garden Sun has made. Kate is taking advantage of the fact that Sun can't understand English to speak freely about herself. When she says something funny and Sun can't help but smile, Kate realizes that Sun can speak English. Sun begs Kate not to tell anyone.

Meanwhile, back at the beach, Hurley is trying his best to mimic everything Jin does in an attempt to catch some fish of his own. Having no luck at all, he throws down his makeshift net in frustration and storms back to the beach, but he steps on a sea urchin and howls in pain. Jin helps him back to the beach and Hurley begs him to urinate on his foot in order to prevent infection. Despite the language barrier, Jin understands his request and flatly refuses.

Back in the jungle, Boone struggles to free himself, but there is no way of reaching the knife. Suddenly, he hears Shannon screaming from another part of the jungle. When he asks her for help, she tells him that she is tied up, too. And there's a bigger problem: the Monster is back and it is nearby. Boone is able to contort himself just enough to get the knife; he cuts himself loose before following Shannon's screams to her location and cutting her loose as well. They both sprint off and hide in a mangrove trunk as the Monster approaches. ♪

In another part of the jungle, Sayid quizzes Jack about which way he thinks north is, and Sayid confirms Jack was correct. Sayid shows him the compass Locke gave to him earlier, which shows north in another direction. Sayid claims it must be defective. He says a minor magnetic anomaly could throw it off by 2 or 3 degrees, but not by as much as it is.

Back in the jungle, the coast is clear. As Boone and Shannon make their way along the trail, Boone tells Shannon all about the Hatch.

While Jack and Charlie make a fire on the beach, Jack asks Charlie for his opinion on Locke. Charlie says that Locke is the one man on the Island that he would trust his life to.

Kate and Sun continue to talk about the English secret. When Kate asks why Sun doesn't tell Jin, Sun tells Kate it's because she loves him, asking Kate, "Haven't you ever lied to a man you loved?" Kate gives no response.

Back at camp, Hurley is sharing his tale of failure and sea urchin with Michael when Jin arrives and presents Hurley with his very own fish. He may not speak English, but he recognizes that Hurley made a good effort and this is his reward. ♪

In the jungle, Boone and Shannon are attacked by the Monster again. This time, try as they might, they can't run fast enough and Shannon is snatched up by the beast. ♪

Boone continues his desperate search for Shannon, but he finds her bloody, crumpled body lying by a stream. Boone weeps as she dies in his arms. ♪

Later, after finally making his way back to camp, Boone sees Locke sitting by the fire and attacks him, blaming Locke for Shannon's death. When Boone tells Locke that Shannon died in his arms, Locke asks Boone why there is no blood on him. Boone starts to respond, but at that moment Shannon comes into view. She's alive and well, chatting happily with Sayid. ♪ Boone realizes that the concoction Locke spread on his head wound was a hallucinogenic that caused Boone to have his "vision." Locke confirms this, and asks Boone how he felt when Shannon died. Boone says, "I felt relieved." ♪ Satisfied that Boone is finally making strides towards letting go of Shannon, Locke tells Boone to "Follow me." He does so. ♪

The Season 1 soundtrack contains the two cues from this episode. "Proper Motivation" covers an action motif that plays as Boone breaks from his bonds and later concludes several other scenes. "Run Away! Run Away!" introduces a theme for the monster, and a motif for flight plays soon before it. The episode also introduces Shannon's theme, which appears in the season 2 track "Shannon's Funeral", and a non-soundtrack motif that plays during scenes featuring multiple languages. It contains an early statement of what later becomes Miles's theme.

Retrieved from "https://lostpedia.fandom.com/wiki/Hearts_and_Minds?oldid=1093508"
Community content is available under CC BY-NC-ND unless otherwise noted.