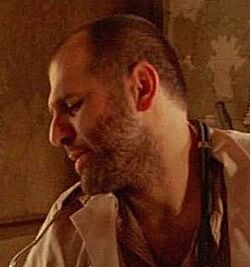 Hajer is the Tunisian doctor who set Locke's leg, after Locke passed from the Orchid (2004) into the Tunisian Sahara (2007). Hajer was in the company of Matthew Abaddon, and worked for Charles Widmore. ("The Life and Death of Jeremy Bentham").

Retrieved from "https://lostpedia.fandom.com/wiki/Hajer?oldid=1072718"
Community content is available under CC BY-NC-ND unless otherwise noted.