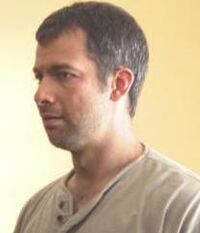 Haddad was apparently the leader or a leading figure of the terrorist cell in Australia of which Essam was a member.

Aiming to disrupt the US-led Coalition prison on Iraq, Haddad plans a bombing operation in Australia, employing 300 pounds of C-4 explosive stolen by his cell. As Sayid gets recruited by Agents Alyssa Cole of the CIA and Robbie Hewitt of the ASIS to recover the explosives, he uses Essam to get acquainted with Haddad.

To win the trust of Haddad, Sayid uncovers a bug planted in his apartment in his smoke detector. With the knowledge of Sayid's former involvement in the Iraqi Republican Guard, Haddad approves his inclusion and regards their meeting as an act of fate. Eventually, Haddad tells Essam that he was chosen to be the martyr in the bombing operation, which is thwarted by Sayid's actions.

Retrieved from "https://lostpedia.fandom.com/wiki/Haddad?oldid=1117244"
Community content is available under CC BY-NC-ND unless otherwise noted.