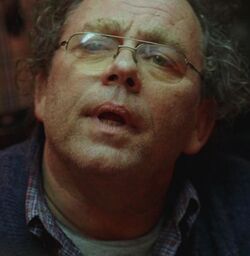 Gus was a Manhattan pawn shop owner who accepted one of Jin's Rolex watches from Michael. After questioning Michael about the Korean writing on the back of the watch (which Gus mistook for Chinese), he took the watch in exchange for a gun and bullets, which Michael later used to attempt to kill himself. ("Meet Kevin Johnson")

Retrieved from "https://lostpedia.fandom.com/wiki/Gus?oldid=1095995"
Community content is available under CC BY-NC-ND unless otherwise noted.