Zoe showed Jin a grid map which the DHARMA Initiative used to identify pockets of electromagnetism.

Jin had signed the map with his own name, "Jin-Soo Kwon", indicating that he had conducted the survey. Widmore's team now required his assistance in making use of them.

It is unclear which part of the Island the map covered. 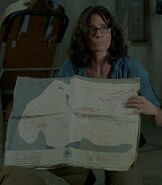 A vector tracing of the EM pocket map
Русский
Community content is available under CC BY-NC-ND unless otherwise noted.
Advertisement