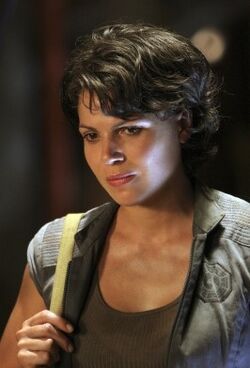 Greta was a member of the Others, secretly assigned by Ben to the Looking Glass station to make sure that any transmissions leaving the Island were jammed. The rest of the Others were told that she and Bonnie were on an assignment in Canada.

When Charlie entered the Looking Glass, she and Bonnie held him at gunpoint. ("Greatest Hits") They then tied him up and interrogated him, though Greta was less aggressive than Bonnie. Charlie told them that it was Juliet who revealed the existence of the station. In response, Greta and Bonnie called Ben, who ordered Mikhail to go to the station.

Following orders from Ben, who didn't want to risk Greta or Bonnie ever revealing their mission along with what they had learned from Charlie, Mikhail killed them both.

When Greta was shot, her body landed in the moon-pool, but it was later recovered by Charlie or Desmond, placed on the floor, and covered with a blanket. ("Through the Looking Glass")

Retrieved from "https://lostpedia.fandom.com/wiki/Greta?oldid=1105963"
Community content is available under CC BY-NC-ND unless otherwise noted.