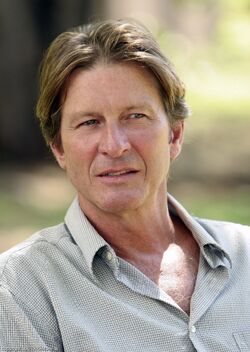 Goodwin Stanhope was an Other who was sent by Ben to infiltrate the tail section survivors. He was killed by Ana Lucia after she found out his true identity. At the time of his death, he was unhappily married to Harper Stanhope and was having an affair with Juliet Burke.

Goodwin claimed to be in the Peace Corps, when he was talking with Ana Lucia, which may have been a partial truth, but little is known for sure about his life prior to the Island, if he was indeed brought there. It is currently unknown whether Goodwin was telling the truth about his time in the Peace Corps, or whether he was one of the Island's original Hostiles. It is presumed that Goodwin was brought to the Island by Jacob, as he is listed as #48 in the list of Jacob's candidates.

On Ben Linus's orders, Goodwin worked with chemicals at the Tempest station. Goodwin was married to Harper Stanhope, the surly, spiteful therapist of the Others. Their relationship had become unhappy by the time Goodwin met Juliet after the death of pregnant Other Henrietta. On their first meeting, Juliet treated a chemical burn wound on Goodwin's arm. ("The Other Woman") Goodwin was present in the operating room of the Staff while Juliet and Ethan operated on Sabine. When Goodwin saw how Juliet was affected by Sabine's death, he consoled her. ("One of Us")

Goodwin began an affair with Juliet, to the chagrin of leader Ben Linus, who believed Juliet belonged to him. ("The Other Woman") Goodwin and Juliet were seen in bed together on Juliet's third anniversary of coming to the Island. ("One of Us")

After receiving a warning from Goodwin's wife Harper, who had learned about the affair, Juliet pressed Goodwin not to go public with his new relationship. Juliet feared for Goodwin's safety, believing, as Harper had warned her, that Ben would eliminate anyone who stood between himself and Juliet. ("The Other Woman")

Seconds after Oceanic Flight 815 broke apart in the air above the Barracks, Ben ordered Goodwin to go to the crash site of the tail section, pose as a survivor, quietly observe and learn about them, and make a list within three days. Goodwin immediately ran off toward the crash site. ("A Tale of Two Cities") Harper's expression of quiet, helpless outrage on hearing the orders intimated that she understood the mission would also be a death sentence for her husband. ("The Other Woman")

Goodwin reached the crash site quickly, and he emerged from the jungle and alerted Ana Lucia Cortez to the fact that Bernard Nadler was stuck in a tree. Goodwin pretended to be one of the tailies and was forced to become quite heavily involved with the group due to the small size. Goodwin's list led raids on the tail-end survivors' beach camp by members of the Others to kidnap those survivors considered to be "good". ("The Other 48 Days")

Upon discovering a list of kidnap victims on the dead body of an Other killed in one of the raids, Ana Lucia began to suspect one of her group was a mole. She put Nathan, who had been acting suspiciously, in a tiger pit. When she threatened to cut Nathan's fingers off the next day as an interrogation method, Goodwin released and then killed Nathan. Goodwin hid Nathan's body to make it appear that he had escaped. ("The Other 48 Days")

Though all of the kidnap targets had been successfully acquired, Goodwin remained with the Tailies. According to the version of events related by Others leader Ben Linus to both Juliet Burke and Ana Lucia, Goodwin had remained to build a case for Ana Lucia as "good" person, "worthy" of being taken into the Others' society. ("Two for the Road")  ("The Other Woman")

When Bernard suggested travelling to high ground in order to test the radio, Goodwin volunteered to go alone, but Ana Lucia insisted on accompanying him. When they reached the top of a hill, the two stopped to rest and have a snack.

Alone with Ana Lucia, Goodwin was asked to theorize about why the Others kidnapped only some of the group. He proposed that the Others had attempted to remove the strongest, fittest members of the group—the threats—including Eko, who survived the kidnapping by killing his would-be captors. Ana Lucia revealed that she had deduced that Goodwin was the mole, as Goodwin's clothes had been dry in the moments after the crash. Abandoning pretense, Goodwin admitted that he killed Nathan because he feared that after Ana Lucia's intended torture of Nathan proved unproductive, her suspicions would shift elsewhere. The murder was justified, Goodwin said, because Nathan "was not a good person"—which was "why he wasn't on the list"—and Goodwin claimed that the kidnapped children, Emma and Zach, were "fine" and "better off now". Enraged, Ana Lucia attacked Goodwin, and a struggle ensued. The two rolled down a hill, and Goodwin was impaled upon a stick. ("The Other 48 Days")

His body would later be found by Pickett and Tom. They reported back to Ben, whose plan to send Goodwin to his death was finally complete. Ben brought Juliet to the hillside, where he admitted that he sent Goodwin on this mission because he knew there would be a good chance that Goodwin would die. When Juliet grievingly asked why, Ben exasperatedly asked how Juliet couldn't understand that she was "his", then left her to sob by the body of her dead lover. ("The Other Woman")

On day 47 after the crash of Oceanic 815, while searching for Michael, Jin and Eko found Goodwin's body. Eko coldly told Jin that his name was Goodwin, and when Jin asked "Others?", Eko nodded in confirmation. ("...And Found")

During his captivity in the Swan, Ben insisted to Ana Lucia that Goodwin had no intention of harming her. In fact, Goodwin suggested that the Others accept Ana Lucia into their society. ("Two for the Road")

For fan theories about these unanswered questions, see: Goodwin Stanhope/Theories

Retrieved from "https://lostpedia.fandom.com/wiki/Goodwin_Stanhope?oldid=1108936"
Community content is available under CC BY-NC-ND unless otherwise noted.