For the symbols on the countdown timer, see hieroglyphs

This page shows a gallery of the glyphs found during the Lost Experience. Note that not all 70 code parts are included, as some codes were given within audios, or expressed about a corresponding glyph design in magazines, etc. See Hansoexposed.com for a full list of all 70 codes and where they were found.

Gallery of Glyphs Found for Hansoexposed.com

7hkbh, from screen of Hansoexposed.com 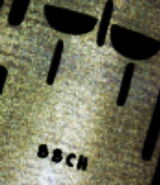 Revealed through The Other Girl's blog, hidden on Channel 4's Moblie page[6].

Found on Rachel Blake's real blog. Under the image for Glyph 748L, the glyph is hidden with Macromedia Flash.

Found in a Channel4.com advert

Found in an amateur commercial.

Found on The Valenzetti Equation's [10] site

On the door of the Radio Harvest station

Near a sculpture in Sydney.

Introduction of the Valenzetti Equation site.

On a low contrast image on Thelostexperience.com.

On DJ Dan's Eyes On The Man page.

On Lost Ninja's blog, linked as "Snakes On A Plane".

On Rachel Blakes StopHanso site, in a flash file [11] linked to from the sidebar.

In a window of Orient Hotel

Broken into 4 pieces and spread about on Speaker's and Ninja's blogs.

On RicherDeeperBroader.com, and a Verizon magazine ad.

Shown on Channel 4 after a Lost broadcast.

A comic strip linked to on Speaker's Blog by "Macaulay Culkin".

In four parts on Ninja's and Speaker's blogs.

Found as part of the UK Glyph Hunt on Ixalon's blog.

Found through a clue left by Speaker on his blog [12]