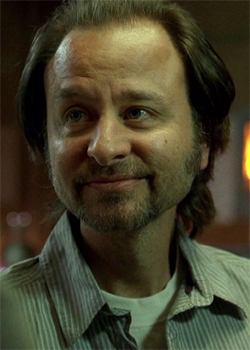 George Minkowski was the communications officer aboard the freighter. He was responsible for maintaining contact via satellite phone with his colleagues on the Island and with the outside world, until he began to experience disorientation caused by the transportation of his consciousness through time and his resultant death.

In the flash-sideways, George was the limo driver for Desmond Hume. He has not remembered his previous life or moved on yet.

Minkowski's consciousness traveled back and forth from the future on the Freighter to his past [1] after his and Brandon's attempt to get to the Island. At one point, he was on a Ferris wheel. ("The Constant")

Sometime later, George went to Fiji to join up with the freighter team. There he introduced himself to a deckhand named Kevin Johnson, who, unknown to him, was Michael Dawson undercover. ("Meet Kevin Johnson")

As communications officer, Minkowski manned the radio room aboard the freighter. All communications to and from the freighter came through him, but he was under strict orders never to answer the incoming calls from Penelope Widmore, a wealthy heiress who was attempting to locate her lost love and Island castaway Desmond Hume. ("The Constant")

After some time on the freighter, George found Michael in his room and told him about a phone call from Walt. George escorted Michael to the communications room and allowed him his privacy when Michael asked to be alone. ("Meet Kevin Johnson")

On December 22, 2004 (freighter time), following Naomi's dispatch from the freighter by helicopter in an attempt to locate the Island, the communications equipment in Minkowski's radio room was sabotaged by Michael. ("The Constant")

Minkowski answered his satellite phone aboard the freighter to find Jack on the other end, speaking from Naomi's cell phone. From the cell phone signal, Minkowski was able to give the freighter a fix on the Island's location. ("Through the Looking Glass, Part 2")

A short time later, Minkowski called back and asked for Naomi, looking to reconfigure the satellite phone. Jack told him that she was getting firewood, while in fact she had recently been the victim of a knife attack by Locke. ("The Beginning of the End")

Minkowski called back again, this time hailing Kate, who had stolen the satellite phone from Jack. Kate told him they were still looking for Naomi and quickly closed the connection. ("The Beginning of the End")

Minkowski next received a call from Naomi, who, mortally wounded, recovered her satellite phone from Kate, after Kate had tracked Naomi's trail of blood through the jungle. Naomi adjusted the satellite phone accordingly so that a signal on the Island could be fixed, and then Naomi asked Minkowski to "tell my sister I love her", a freighter team code phrase indicating she had met with hostility. ("The Beginning of the End")  ("Confirmed Dead")

After dispatching four other members of the freighter team to the Island by helicopter, Minkoswki later received a call from Daniel Faraday on Naomi's satellite phone. Minkowski abruptly asked, "Am I on speaker?" Faraday adjusted the phone and spoke to him privately. ("Confirmed Dead")

With the freighter anchored and no orders, Minkowski and fellow crew member Brandon decided to tour the Island and set out aboard the ship's tender. Before reaching the Island, Brandon started "acting crazy", forcing Minkowski to return to the freighter. Brandon subsequently died, and Minkowski too began to suffer the effects of time-transported consciousness, leading to his being strapped down in a bed in the freighter's sickbay. ("The Constant") Thereafter, the satellite phone was answered by Regina, who told callers that Minkowski was unavailable to come to the phone. ("Confirmed Dead")

At midday on December 24, 2004 (freighter time), Sayid and Desmond landed on the freighter with Lapidus. Desmond, who by then was also exhibiting the disorienting symptoms of temporal displacement, was taken by freighter crew members and locked in the sickbay along with Minkowski. Recognizing Desmond's symptoms, Minkowski offered to assist Desmond in going to the disabled radio room to try to restore contact with the outside world and call Penelope Widmore, the "constant" Desmond needed to end his flashes between past and present. Desmond and Sayid unstrapped Minkowski, whose nose had begun to bleed, and they proceeded out of sickbay to the radio room. Once there, Minkowski began to experience convulsions and finally, uttering "I can't get back", Minkowski died in Desmond's arms. ("The Constant")

George Minkowski worked for Charles Widmore as a limo driver, assigned to chauffeur Desmond Hume. He was first seen picking Desmond up at LAX. Noticing Desmond doesn't have a wedding ring, he asked Desmond whether he would like him to arrange some female companionship. When Desmond said he was there to work, George said that that was why Desmond was the boss's right hand man and he was the driver. ("Happily Ever After")

He later alerted Desmond to the risk of confronting Eloise Widmore. After taking Desmond to meet Penelope Milton, he again offered to help Desmond in whatever way he could. Desmond asked him to get a copy of the passenger manifest from Oceanic Flight 815. ("Happily Ever After")

Retrieved from "https://lostpedia.fandom.com/wiki/George_Minkowski?oldid=1117115"
Community content is available under CC BY-NC-ND unless otherwise noted.