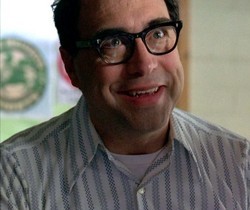 Gellert was John Locke's science teacher at Cowin Heights High School. After rescuing 16-year-old John from being locked inside a school locker, Gellert told John that he had a call from Portland from a Dr. Alpert on behalf of Mittelos Laboratories, who worked with chemistry and new technologies. Mittelos was looking for young, bright minds and they wanted John to go to their summer camp. When Locke asked how they knew about him, the teacher suggested that they had sent a representative to a science fair at Costa Mesa where John had presented a display. John got upset and told Gellert that he was not a scientist, but the type of person who was interested in sports and cars. Gellert kindly told him that even if he wanted to be more like the popular boys at school, it was just not who he was. He said that John simply couldn't be a super-hero, to which John responded, "Don't tell me what I can't do!" and walked out. ("Cabin Fever")

Retrieved from "https://lostpedia.fandom.com/wiki/Gellert?oldid=1084622"
Community content is available under CC BY-NC-ND unless otherwise noted.