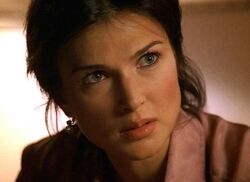 Gabriela Busoni was the daughter of Angelo Busoni, a patient who came to St. Sebastian Hospital specifically to be treated by Jack. She said she knew about Jack and his previous miraculous operation. She also knew Jack married the woman he performed the "miracle" operation on but did not reveal how she knew any of this. Gabriela also confessed that she did not believe in miracles, unlike her father.

Jack attempted the surgery on her father, and succeeded in removing the tumor, but the patient's heart gave out and he died in surgery. Gabriela later thanked him for trying and kissed him.

Upon returning home, Jack tearfully admitted to Sarah that he shared a kiss with Gabriela. In return, Sarah then revealed to him that she has been seeing someone else.

Retrieved from "https://lostpedia.fandom.com/wiki/Gabriela_Busoni?oldid=1095186"
Community content is available under CC BY-NC-ND unless otherwise noted.