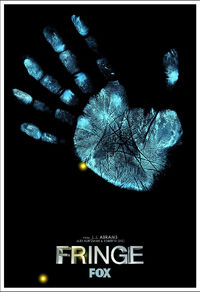 Fringe is an American television series that was co-created by J. J. Abrams, Alex Kurtzman, and Roberto Orci, and has several connections to Lost. The series premiered in North America on September 9, 2008, on FOX. The show follows an FBI team coined as the "Fringe Division" and based out of Boston, Massachusetts under the supervision of Homeland Security. A major element of the series is fringe science, including telekinesis, mental transference, astral projection, strange biological organisms and mutations, rare communal diseases, teleportation, and travel between parallel universes.

On the extras for the Fringe Season 1 DVD, Kirk Avecedo (who portrays Agent Charlie Francis) briefly mentioned that he was shown the script for Lost's Pilot episode. He turned down the job because he did not want to star in Gilligan's Island.

In the ninth episode, investigators search a dead man's apartment, where they find an old plane ticket. The airline named on the ticket is Oceanic Air.

In the Season 1 episode "The Cure" (2009), a minor character is named Elizabeth Sarnoff, a direct reference to one of the writers of LOST. [1]

In the episode The Man From The Other Side a deleted scene from Season 1 of Lost is quickly shown. Because of the nature of the interference, it is likely that this scene was not cut in the alternate reality. [2]

In the Season 3 episode "Lysergic Acid Diethylamide" the animated William Bell pours a glass of the 60 year-old bottle of MacCutcheon Scotch whiskey after Walter and Peter join him in the World Trade Center.

Several numbers from Lost have appeared in Fringe

The Season 1 piece "Hollywood and Vines" plays during act IV of the pilot episode of Fringe. Desmond's flash-sideways theme plays during a guest appearance by Henry Ian Cusick.[3]