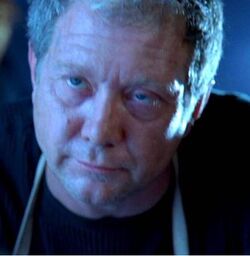 Frank Duckett was an American running a shrimp stand in Australia. Sawyer was told by his associate Hibbs that Duckett was the original Sawyer. However, it turned out that Hibbs had tricked Sawyer, and Duckett merely owed Hibbs money, and because of this, Hibbs wanted Duckett dead, and thus Sawyer was conned into killing him. Just before he died, Duckett told Sawyer, "It'll come back around." ("Outlaws")

Retrieved from "https://lostpedia.fandom.com/wiki/Frank_Duckett?oldid=1106448"
Community content is available under CC BY-NC-ND unless otherwise noted.