This article is about the episode. For the orchestral piece, see "Follow the Leader" (composition). 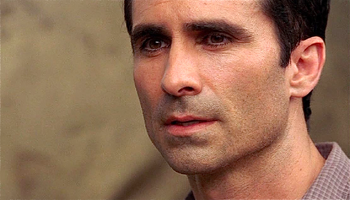 "Follow the Leader" is the fifteenth episode of Season 5 of Lost and the 101st produced hour of the series as a whole. After the death of Daniel in 1977, Jack and Sayid work with Eloise and Richard to follow through with Daniel's plan to detonate the hydrogen bomb. In present time, Locke finally takes his place as leader of the Others and begins his new mission, with Richard's help. It was originally broadcast on May 6, 2009.

Jack and Kate discuss their options while hiding behind bushes at the Hostiles' camp. Suddenly, a gunshot is heard, and they watch Daniel collapse to the ground. As they are about to run away, two men charge them on galloping horses. One of them knocks out Jack with his rifle's butt, and the other one aims a rifle at Kate.

In the Hostiles camp, Eloise thumbs through the pages of Daniel's journal and looks at Daniel's corpse on the ground in front of her. She reaches the first page, and is confused by the dedication in it, which she appears to recognize as her own handwriting. Charles Widmore and a man arrive, holding Jack and Kate captive. Richard explains the situation to Widmore. Eloise asks Jack and Kate if they've come with Daniel, to which Jack replies "Yes." She orders that they be taken to her tent. Widmore inquires why the DHARMA Initiative would declare war on them, but Eloise tells him that the three intruders are not DHARMA people. In the tent, Jack reveals to Kate that he means to reset their lives, having the plane never crash and avoiding all the misery that's happened since.

Kate adamantly states that it was not all misery, but does not elaborate. He responds that enough of it was. ♪ After entering the tent, Eloise assures Jack and Kate that she will believe whatever they say because she has just killed a man who claims to be her future son, the same man who told her to bury the bomb 23 years earlier before disappearing. Jack tells Ellie that by using the bomb, they can alter the future, and undo what Ellie did to her future son. ♪

At the Barracks, Radzinsky takes Sawyer and Juliet to the security office where he interrogates a bound Sawyer about the location of Kate. Juliet, also bound, sits off to the side watching. Sawyer is brutally beaten by Radzinsky; when Horace tells him to stop, Radzinsky says that he is in charge now. Juliet begs them to stop and tells them that they aren't out to hurt them, pointing out that they have known each other for three years. She claims her and Sawyer are good people. Sawyer tells her not to talk and that whatever she says they won't believe. Radzinsky, Horace, and Phil draw the conclusion that Sawyer is not going to talk no matter how much they beat him, but Phil claims that he has a way to make Sawyer talk. He then hits Juliet across the face, angering Sawyer.

Meanwhile, Hurley, Miles, and Jin escape the barracks, heading for the beach. Chang follows them and asks if they're really from the future. Hurley denies it. To determine the truth, Chang quizzes Hurley with questions relevant to 1977. Hurley struggles with the answers, being unsure of his birth year, the current president of the U.S., or whether the Korean War had even occured. Flustered, Hurley finally admits that he's from the future and Chang believes him. Chang then asks Miles if it is true that he is his father, and Miles reluctantly affirms that he is. Having confirmed his suspicions, Chang reveals that he now believes what Daniel told him about needing to evacuate the entire Island.

At the Hostiles camp, Widmore and Richard are standing over Daniel's body. Widmore asks Richard why Daniel looks so familiar to him. Before Richard can respond, Eloise emerges from the tent and orders Richard to untie Jack and Kate. Eloise gently covers Daniel's body with a blanket and closes his eyes. She then announces to Widmore that she is taking Jack and Kate to the bomb. Widmore protests and they appear to argue. Jack asks Richard who that man is and Richard tells him that it's Charles Widmore. Richard implies that Eloise and Charles are romantically involved; but their relationship is complicated.

Chang returns to the Barracks and sees Horace, Radzinsky and the other men interrogating Juliet and a bloody and bruised Sawyer. He tells Horace, Radzinsky and the others to stop the drilling at the Swan and orders them to evacuate the Island. Radzinsky angrily insists on continuing the drilling and when Chang appeals to Horace, Radzinsky claims that he is in charge now. Sawyer agrees with Chang and proposes a deal to Radzinsky: if he and Juliet can leave the Island on the submarine, he will tell Radzinsky everything he wants to know. ♪ As a result, he demands that Sawyer draws a map of the Hostiles' location. Sawyer and Juliet are then taken away to the submarine.

Eloise, Kate, Jack, Richard, and Erik come to the creek. As they stop to attempt to swim under the tunnels, Kate tells Jack she's going back. Erik threatens to shoot Kate if she tries to leave. A gunshot follows, leaving Kate shocked. She looks down, only to realize she has not been hit. Sayid emerges from cover as Erik goes down. Sayid points his gun at Eloise and Richard as they put up their hands. Jack tells Sayid about changing the future, but Sayid is convinced he has already done so by killing Ben, but Kate informs him that Ben is alive. Kate is allowed to leave the group and heads for the submarine. ♪

At the Barracks a message is heard over the loudspeakers that the sub will leave in 30 minutes. At the dock, people board the sub while Miles, Hurley, and Jin watch. They see Charlotte and her mom get out of a bus and head for the dock. Lara and baby Miles get out. Lara is arguing with Pierre, resulting in him angrily telling them to leave. Adult Miles realizes that his father had to be harsh to his mother in order to save her life. Miles sees Juliet and Sawyer, still handcuffed, brought in a jeep. Miles, confused, hands the binoculars to Hurley, who tells Miles that Sawyer probably has a plan.

On the dock, Sawyer sarcastically quips that he'll buy Microsoft and bet on the Cowboys in the 1978 Superbowl. He apologizes to Juliet and says that she was right three years ago, that they should have gotten on the submarine. Juliet tells Sawyer she was glad that she stayed behind. ♪♪♪ Once on the submarine, Juliet and Sawyer are handcuffed to a table in the ship's gallery. Juliet asks Sawyer what they will do once they get to Ann Arbor. Sawyer replies that they aren't going to Ann Arbor, and that they'll be free in the "real world". Juliet chuckles, saying she doesn't even know what that means anymore. They hold hands and say that they love each other. ♪ Before the hatch door can close, Phil brings Kate to the submarine, where she is cuffed with Sawyer and Juliet. ♪ They give each other awkward looks as the submarine departs from the Island. ♪

Richard, Jack, Eloise and Sayid swim down to the underground tunnels beneath the Barracks where the bomb is hidden. ♪ As they walk through the tunnels, Sayid whispers to Jack, "I'm sure it's occurred to you that this woman's motivation in helping us detonate the hydrogen bomb is only to annihilate the DHARMA Initiative." Jack responds that her motivation can be trusted because Eloise will be the one to tell them how to get back to the island 30 years from now, but Sayid is not convinced. They come to a room and Eloise uncovers the bomb. She looks at the other two and says "Now what?" while everyone looks confused. ♪♪

At the Others' camp, Richard is sitting at a table building a ship in a bottle on the beach. An Other named Vanessa informs Richard that "he's here." Locke arrives with a boar, followed by Ben and Sun. ♪ Richard questions that it's been three years since he last saw him, wonders where he's been and comments that there is something different about Locke. Locke tells Richard that he has a new purpose, and needs Richard to come with him immediately. After Ben tells Sun that Richard has been around for "a very long time," Sun interrupts Locke and Richard with the 1977 DHARMA Recruits picture, asking Richard if he recognizes the people in it. Richard replies he recognizes them because he "watched them all die." ♪

Later in a private conversation with Sun, Locke implies he believes their time-traveling friends are not dead. Locke asks Richard if he still has the compass he gave him in 1954, Richard says he does. Locke asks Ben to join him and Richard on the journey. Ben wonders if Locke doesn't trust him around his former people, but Locke informs him that he isn't afraid of anything he can do anymore. Locke tells Sun to stay behind, and that he will be back in a few hours, and that she has his word that he will find a way for her and Jin to be reunited. Locke, Richard, and Ben then leave with the compass on into the jungle.

During the trip Richard asks Locke where he has been the past three years, Locke is surprised he doesn't know. Locke tells him that they are going to the Beechcraft (where the real Locke flashed to during the Island's time movements), and after that they must find Jacob. When they have almost arrived, Locke tells Richard that he must treat a man's wound at the Beechcraft, and then tell him to bring everyone back to the Island, and to do this he has to die. Locke then tells Ben that the man is Locke himself.

While Richard tends to the time-traveling Locke, the other Locke tells Ben that he knows that Ben has never seen Jacob, which surprises Ben. ♪ Richard then tells Locke that he seems pretty convinced about what he made him do to his past-self, especially since he said to him that he was going to die. Locke tells Richard that he did die.

The three then return to camp, where Locke makes a speech to all the Others present he is going to see Jacob, and he would like them all to come with him. Sun questions Locke if "this man, Jacob" can help them bring Jin and the rest of their people "back here" and is assured by Locke that he can, and that Richard has agreed to show them where they need to go to see him. The Others are excited by this, with the exception of Richard, who expresses his worry to Ben that he's "starting to think John Locke is gonna be trouble". Ben responds by rhetorically asking, "why d'ya think I tried to kill him?"

The next morning, Locke and the Others leave to find Jacob. ♪ Ben then tells Locke of Richard's concerns, that seeing Jacob makes him uncomfortable. Ben states that despite their "differences in the past" he is "here to follow [Locke] now," and that if he needs Jacob's help to reunite with his people who are in 1977 he will do whatever he can. Locke responds that he's "not interested in being reunited with [his] people"; they're going to Jacob "so [he] can kill him" ♪♪

The Season 5 soundtrack includes the following tracks from this episode:

Retrieved from "https://lostpedia.fandom.com/wiki/Follow_the_Leader?oldid=1108475"
Community content is available under CC BY-NC-ND unless otherwise noted.