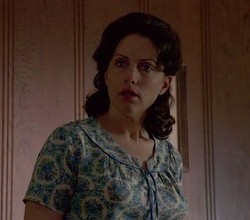 Florence was John Locke's foster mother. She fostered John shortly after his birth. She was the mother of Melissa (and maybe of Jeannie as well).

Florence once told five-year-old John that there was a man to see him and that he should be on his best behavior. Richard Alpert introduced himself and told John that he runs a school for special children and has reason to believe that he was one of them and wanted to test him. Afterwards, she entered the room and asked how John did. Richard responded that John was not quite ready for his school and walked out of the house. Florence scolded John, asking what he did, and he looked down dejectedly. ("Cabin Fever")

It is unclear if Florence is the same foster mother that John told about in "Outlaws". After his sister Jeannie fell off the monkey bars and broke her neck, the foster mother blamed herself. She stopped eating and sleeping. The neighbors started talking, afraid she might do something to herself. About six months after Jeannie's funeral, a golden retriever came padding up the driveway, walked right into the house, sat down on the floor, and looked right at John's foster mother. She looked back and burst into tears. She believed that the dog contained Jeannie's spirit. The dog slept in Jeannie's old room, on Jeannie's old bed, and stayed with them until the foster mother passed away five years later. It then disappeared.

During casting for "Cabin Fever" she was described as: Florence. Any ethnicity, late 30s. A foster mother who is worn out and overwhelmed. She is charmed by an unexpected visitor she anxiously hopes might help her situation, but she turns punitive when it doesn't go well. Co-star. [1]

Retrieved from "https://lostpedia.fandom.com/wiki/Florence?oldid=1095294"
Community content is available under CC BY-NC-ND unless otherwise noted.