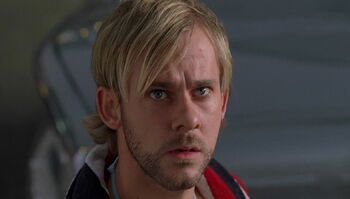 "Fire + Water" ("Fire Plus Water") is the twelfth episode of Season 2 of Lost and the 37th produced hour of the series as a whole. Charlie comes to the conclusion that Aaron must be baptized and be "saved", prompting him to recall his past of trying to save his brother. Meanwhile, the first signs of Hurley and Libby's relationship begins to show.

Karen, Liam's wife, has just given birth to their daughter, Megan, who is named after Liam and Charlie's mother. Charlie is there doting on the newborn but Liam is not there. Charlie tells Karen that Liam missed the flight because he blew a tire on the way to the airport. Karen asks if Liam is okay, Charlie responds "He's great. He's a dad."

Charlie returns to his apartment where the Kinks are playing "He's Evil" (the same song he was singing to Jin in "The 23rd Psalm") and finds Liam lying on his couch, "fixing" himself. Charlie encourages Liam to hurry to the hospital as soon as possible to see his new baby, but Liam is still in his own world, saying to Charlie "I left you some."

Drive Shaft is filming an advertisement for Butties baby diapers. They are lip syncing to the song "You All Every Butties," a reworked version of their hit "You All Everybody." In order to save the band and make some money, Charlie needs Liam to get his act together, but Liam is too out of it and falls through the bars of the big child's crib in which they are filming. The ad producer tells Charlie to get rid of Liam, but Charlie says that it's his brother. They are all fired.

Charlie tries to reach inside Liam and shake him back to life. But even after Charlie and Liam share a moment by singing together Charlie's new song about their comeback, (Together Now), about how they both "can be saved," Liam only has one question to Charlie: does he have any heroin.

Charlie comes home and finds Liam has sold Charlie's piano to build a new life for his family in Australia. He leaves Charlie alone in London, still trying to find an answer; what about his family?

In a dream, young Charlie comes down a flight of stairs in his slippers. It's Christmas morning and his brother Liam is already hard at work ripping open his presents. But while Liam continues to unwrap gift after gift, Charlie finds nothing at all for him. That is, until his mother leads him over to a brand new piano. Charlie is thrilled, but before he can even begin to enjoy the gift, he learns it comes with a price, with his mother wanting him to become successful so he can "save them." Charlie, now fully grown, plays the piano, though it's now on the beach. Suddenly, he hears Aaron's cries from inside it. Charlie tries to open it up, but can't. The incoming tide then tips the piano over onto its back and it begins to drift away, apparently carrying Aaron out to sea. ♪ Charlie wakes up and checks to make sure Claire and Aaron are alright, and finds them with Locke. ♪

Charlie tries to get closer to Claire, but Claire asks for some space, for now. He leaves, telling Aaron to take care of his mom.

Hurley approaches Sawyer and Kate and asks Sawyer about "the Tailies," Libby in particular. Sawyer asks if Hurley has a love connection growing there. Hurley denies this and leaves, embarrassed. Kate and Sawyer both see Ana Lucia and Jack coming out of the jungle, talking to each other. Sawyer mentions it's the third time that he has seen them together. It doesn't make either of them particularly comfortable.

While Charlie plays his guitar on the beach, he hears the faint cries of a baby and follows the sound to the ocean, where he sees Aaron's cradle being tossed on the waves. He struggles to swim out and bring Aaron back to shore, where he discovers both Claire and his mother kneeling on the beach in robes, in angelic poses from a religious painting. Charlie is seeing a version of a religious painting from Charlie's childhood home. The angelic Claire and Charlie's mother repeat in unison: "The baby is in danger" and that Charlie "has to save him". A plane crashes in the background. A dove flies out of the sky, through the jungle, and past him out to sea. Hurley approaching him in biblical robes. Charlie wakes up standing in the ocean holding the baby, realizing it was a vivid dream. He tries to explain to Claire (and everyone else) that he was only trying to save him, but Claire slaps him across the face.

Sawyer gives Hurley a small push towards a relationship with Libby, and the two of them do laundry together in the hatch. Hurley asks if he knows her from somewhere. She distracts him by changing her shirt in his presence. She tells him that he stepped on her toe on the plane when he boarded last.

Charlie tries to enlist Locke as an ally, only to discover that Locke suspects Charlie is using heroin again. ♪ Charlie defends himself by saying that he and Eko burned the plane, and none of the Virgin Mary statues are left. Locke says trust is a hard thing to win back, and Claire needs her time.

Locke stands close by, watching Charlie, just like he did in his first days on the Island. ♪

In the jungle, Charlie finds his stash of heroin, ♪ but Locke appears. Charlie claims he came to finish the job and get rid of them all. But Locke doesn't believe him. He takes away all of the statues. ♪

Claire asks Locke whether she and Aaron can sleep in the hatch but Locke offers to move his things closer to her tent for a while. She asks him about baptism and how much he knows about it. Locke tells her his view, calling it "spiritual insurance" so the baby will go to heaven. He says that there is no danger to her or the baby.

Charlie starts a fire near the survivors' camp, attempting to distract Claire from Aaron's crib. While Sayid leads an attempt to put out the fire, Charlie grabs Aaron and runs with him to the ocean to baptize him. ♪ Locke and several other survivors run over after they hear Claire's cries.

Locke tries to convince Charlie to hand him the baby, but Charlie refuses, saying, "Aaron's not your responsibility. Where were you when he was born? Where were you when he was taken? You're not his father. You're not his family." Locke replies that neither is he. ♪ Charlie gives Locke the baby, who hands him to Claire. Charlie tries to apologize but Locke punches him three times in the face. Charlie stumbles and falls into the water. Everyone leaves Charlie in disgust.

Charlie sits on the beach alone and pulls his hoodie over his head.

Retrieved from "https://lostpedia.fandom.com/wiki/Fire_%2B_Water?oldid=1117083"
Community content is available under CC BY-NC-ND unless otherwise noted.