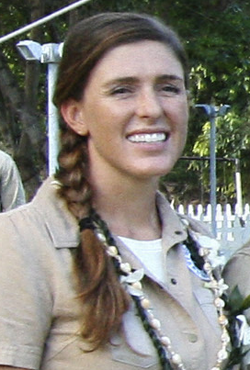 Fern was a DHARMA Initiative worker, who worked on the island since 1977, until she was killed during the purge.

Fern arrived the island as a new DHARMA recruit in July 1977, and guiding by Rex at the barracks, she was first seen walking towards the processing center along with another new member to process their registration. Later, together with other new members, Fern took part in a group photo, where she stood at the right side. ("Namaste")

Days later, Fern was seen helping Pierre Chang while he was filming the Arrow orientation film. ("Because You Left")

Fern was seen lying down in the Barracks after the Purge, dead and bleeding from her nose as a result of the toxic gas. Since she was lying next to a laundry bin with clothes surrounding her corpse, it is likely that she was handling dirty laundry right before she died. After her death, she was subsequently buried in the mass grave. ("The Man Behind the Curtain")

Retrieved from "https://lostpedia.fandom.com/wiki/Fern?oldid=1115940"
Community content is available under CC BY-NC-ND unless otherwise noted.