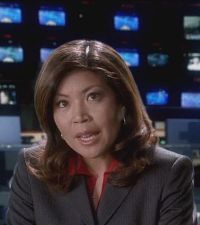 The female anchor reported on the discovery of what was believed to be Flight 815 in the Sunda Trench.

She was first seen anchoring the news report concerning the finding of the supposed wreckage, which was watched by Daniel Faraday and his caretaker. She later reported on the recovery and identification of a corpse believed to be Seth Norris, which was watched by Frank Lapidus. ("Confirmed Dead")

Michael also saw her report on the discovery of the wreckage from his apartment in New York as he was trying to kill himself. ("Meet Kevin Johnson")

Retrieved from "https://lostpedia.fandom.com/wiki/Female_anchor?oldid=975857"
Community content is available under CC BY-NC-ND unless otherwise noted.