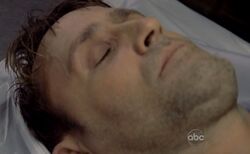 Felix was the name of a man whose last thoughts Miles read as part of his recruitment process to join the freighter science team. Miles found out that Felix was on his way to deliver papers, pictures and photographs of empty graves to Charles Widmore. One of the papers was an invoice for an old airplane, presumably the fake Oceanic 815 discovered in the bottom of the Sunda Trench. ("Some Like It Hoth") Following Felix's death these papers landed in Tom's possession. Tom later showed the photos of empty graves and the invoice for the old airplane to Michael to convince him to help Ben and become a spy on the Kahana. ("Meet Kevin Johnson")

Retrieved from "https://lostpedia.fandom.com/wiki/Felix?oldid=1116016"
Community content is available under CC BY-NC-ND unless otherwise noted.