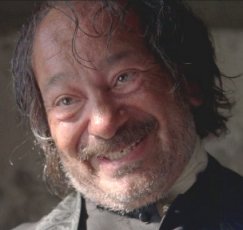 Father Suárez was a corrupt Catholic priest at a prison in Tenerife, Canary Islands. In 1867, a prisoner named Ricardo begged for forgiveness for accidentally killing a doctor. However, Suárez refused to grant him forgiveness, claiming that there is no absolution of sin for murder (contrary to Catholic doctrine). He told Ricardo that the only way he could gain absolution was through penance, but he wouldn't be able to achieve it because he had been sentenced to be hanged the next day. However, the following day, Father Suárez sold Ricardo to Jonas Whitfield, an officer of the Black Rock, who was searching for English-speaking slaves. ("Ab Aeterno")

Retrieved from "https://lostpedia.fandom.com/wiki/Father_Suarez?oldid=1112339"
Community content is available under CC BY-NC-ND unless otherwise noted.