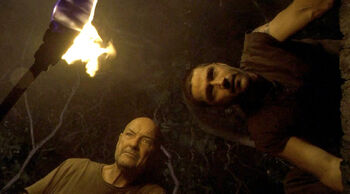 "Exodus, Part 2" is the twenty-fourth episode and two-hour finale of Season 1 of Lost, and comprises the 24th and 25th produced hours of the series as a whole. As with the previous episode, "Exodus, Part 1", flashbacks show numerous characters in Sydney before they board their doomed flight. With the dynamite retrieved, the team faces the task of bringing the volatile substance back across the Island to the Hatch. Meanwhile, Charlie and Sayid set off to rescue Aaron after Danielle kidnaps the child from Claire.

In the airport, after Sun spills coffee all down his shirt, Jin goes to the bathroom to clean up. Meanwhile, airport security releases Sayid and apologizes to him for the delay. In the bathroom, Jin encounters a casually dressed Caucasian man who asks him for a paper towel in English. When Jin indicates that he speaks no English, the man switches to Korean. Seeming somewhat more menacing now, he reveals that he works for Mr. Paik, and knows that Jin is attempting to run away with Sun. He tells Jin to complete his delivery of a watch to an associate in Los Angeles. If Jin does anything else, he says Jin will lose Sun. ♪

At a hotel near the airport, Charlie looks for his stash before leaving for his flight. A girl from the previous night is in his bed, and she needs a fix. As Charlie finds the drugs, she asks if he has any left. He says he's out, lying, and tries to escape in a hurry while claiming he will send her a free Driveshaft album. She can tell he's lying and attacks him for the drugs. After a struggle in the hotel room, Charlie refuses to let go of his heroin. She calls Charlie pathetic and storms out of the room.

Michael and Walt sit in the airport waiting for their flight. Walt is absorbed in his Game Boy Advance SP, and Michael is frustrated that they can't connect. He gets up, claiming to need to call work, but instead calls his mother. He expresses his exasperation to his mother, and offers to pay his mother to take care of Walt. While Michael is on the phone, Locke passes by, being pushed in his wheelchair. When Michael hangs up, Walt is right next to him asking for new batteries for his game. He may have heard the whole conversation.

In room 2342 of his hotel, Hurley wakes up late for his flight due to a localized power outage, apparently caused by Hurley plugging too many devices into a blackened electrical outlet in his room. On his way out of the hotel, Charlie yells at him for holding up a full elevator. In a mad dash for the airport, he experiences several mishaps including a flat tire (during which his car slows from 42 km/h to 16, then 15, then 8, and finally 4) and arriving at the wrong terminal. He runs through the airport (passing a team of soccer players wearing jerseys with the Numbers in numerical order). He buys an electric scooter from an old man (for $1600) and manages to get to the terminal just as they are closing the gate. At Gate 23, Hurley finds the boarding doors closed, but the gate attendant is able to get them to reopen the doors for him, and he hugs her effusively before boarding. ♪

Oceanic airline staff report to Locke that they have lost the wheelchair normally used to load disabled passengers onto the plane, and he must be manually carried onto the plane by two attendants. When he drops a pamphlet from his seat, he is unable to reach it. He is clearly frustrated by the whole situation and struggles to maintain his dignity. ♪

Finally, all of the passengers board Oceanic Flight 815. They take their seats, unaware of each other and the relationships they will form, as they casually engage in friendly smiles and gestures to the strangers. As Hurley boards, Walt looks up from his Gameboy for a moment and smiles as Hurley gives him a thumbs up. Hurley smiles back, sitting down and settling in with his headphones and comic book in which a rampant polar bear is seen. Arzt helps Claire put her bag in the overhead compartment. Shannon frantically searches for her asthma medicine and Boone pulls the medicine out of his pocket with a smile. ♪

Jack, Kate and Locke go into the Black Rock and find the crate of dynamite. ♪ While attempting to handle the dynamite carefully, Arzt himself accidentally triggers one of the sticks and it explodes, killing him. The remaining group members decide to continue their attempt to carry the dynamite; they wrap the sticks in wet cloth as Arzt had demonstrated. Locke suggests they carry a redundant backup; in case one of the carriers blows up, the other will still be able to blow the Hatch. Locke, Kate, and Jack all want to volunteer to carry the dynamite, so they draw straws for the responsibility. Jack draws the long stick, so Kate and Locke carry the dynamite. ♪ On their way back to the Hatch, Jack and Kate see a small cloud of black smoke move in an unnatural way through some trees, followed by the rumbling of the Monster. According to plan, Jack and Locke drop their packs, but Kate keeps hers on.

Locke wants to get a glimpse of the Monster and almost ends up under it. His leg is caught by the Monster, which drags him through the jungle. Jack grabs Locke's arm and the two are dragged into the opening of an underground cavern, with Jack preventing Locke from being pulled to the bottom.

Though Locke pleads with Jack to let him get dragged under, Jack instead tells Kate to grab dynamite out of his bag and drop one down the hole, revealing he had switched the content of their packs. Kate drops the dynamite down the tunnel, causing an underground explosion and resulting in black smoke similar to that seen before coming out of a nearby hole on the horizon. It moves in a bizarre, almost supernatural way, and disappears, all in less than a second. The hold on Locke slackens, and they are able to pull him out of the hole. ♪ Later, Locke reveals that the reason he wanted to fall in the cavern is because it was his destiny and he felt the Island was testing him.

On the beach, Sayid is leading the group back to the caves, awaiting Jack's party's return. Charlie and Claire are alone on the beach when Rousseau runs up, telling Charlie she needs to see Sayid urgently. ♪ When Charlie runs off to get Sayid, Rousseau begins asking Claire if she can hold her baby, and Claire tries to make several excuses why she can't give Rousseau the baby. Claire sees a strange scar on Rousseau's arm and has a short ambiguous flashback to a struggle between Rousseau and herself. Soon, Charlie and Sayid return to find Claire knocked out. When she comes to, she exclaims that her baby has been taken. Sayid surmises that Rousseau intends to attempt an exchange of the baby, which Claire has just named Aaron, for her own child, Alex, with the Others.

With little daylight left, Charlie and Sayid go toward the black smoke. ♪ On their journey, they encounter the drug smugglers' plane, and Sayid, ignorant of Charlie's junkie past, mentions it is full of heroin. They also encounter a trap set by Rousseau, which injures Charlie. Charlie's wound to the forehead bleeds profusely and Sayid tells him to go back to the camp, but Charlie refuses.

Sayid cuts open a round of ammunition, pours the gunpowder into the wound, and sets it on fire to cauterize the injury. When Sayid and Charlie arrive on the beach with the black smoke, there are no other people, just a pyre burning the smoke. The sound of the baby crying alerts them to Rousseau hiding in the bushes. She cries and tells them she overheard the Others saying that they were going to go after "the boy," and she thought if she brought Aaron to them, they would return her child. She returns the baby. Sayid and Charlie take Aaron back to the caves, where mother and baby are reunited and Shannon seeks out and embraces Sayid. One of the statues filled with heroin is in Charlie's backpack. ♪

Meanwhile, Jack, Kate, Locke, and Hurley arrive at the Hatch. They carefully set up the dynamite on the hinge of the Hatch, and are about to set it off when Hurley notices the the Numbers engraved on the Hatch's side. Terrified, he yells at them not to light it, but Locke lights the fuse anyway. Hurley tries to stamp out the fuse, repeating "the Numbers are bad," but Jack tackles him and the dynamite explodes. They pry open the Hatch to reveal a deep, dark metal tunnel. A ladder with broken rungs can be seen near the top of the tunnel. Jack and Locke stare down into the pit before them. ♪♪♪

On the raft, the crew is sailing according to plan, and Michael bonds with Walt. ♪♪ Walt learns about Sawyer's long term search for revenge. ♪ Jin returns to Michael the watch which caused a fight between them. ♪ The raft's rudder breaks off and Sawyer dives into the water after it, risking his life. ♪ The rudder is hauled back to the raft. Michael discovers the gun in Sawyer's shirt, but doesn't tell the others. That night, their radar sweep turns up a boat in the distance. They fire their single flare, and the boat approaches. ♪ It is a group of four men. The castaways are ecstatic on finding rescue. The boat's captain initially seems friendly, but suddenly demands they hand over "the boy." Sawyer tries to pull his gun, but he is shot by one of the other crewmen and falls into the water. Jin jumps into the water to try and save Sawyer, and the strangers overpower Michael and kidnap Walt. As they sail off, one of the crewmen throws an explosive onto the raft, destroying it.

The Season 1 soundtrack features three cues from this episode. "I've Got a Plane to Catch" plays during Hurley's flashback and is a variation on his theme. "Monsters Are Such Innnteresting People", which plays during the survivors' confrontation with the monster, combines a number of action motifs. The episode closes with "Oceanic 815", which also combines several themes, most notably the main theme and the life and death theme.

Retrieved from "https://lostpedia.fandom.com/wiki/Exodus,_Part_2?oldid=1116974"
Community content is available under CC BY-NC-ND unless otherwise noted.